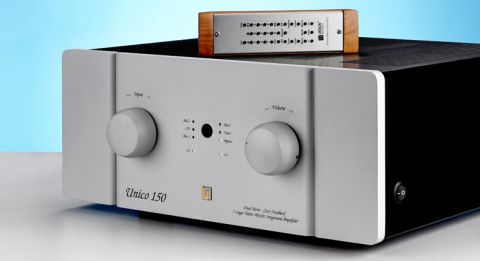 The Unico 150 is something of a powerhouse. It delivers an immensely muscular sound mixed in with a large dose of fun

Unison Research’s flagship Unico amplifier is something of a beast, albeit one dressed in a crisp smart suit. The numbers reveal a lot about this hybrid integrated – £4000, 25kg and 150W per channel.

But even these take a back seat to the way it looks on our test rack. The Unico dwarfs most of our reference kit thanks to its generously stocky proportions.

That nicely finished casework measures a substantial 18 x 44 x 44 cm (hwd), so make sure you have plenty of space to house it. While the Unico doesn’t run particularly hot it’s still good to leave a decent amount of space around to help with ventilation.

Build quality is mostly good. The three-piece front panel is crisply machined and the rest of the casework feels immensely solid. Neat details such as the classy-looking RCA socket used and Unison Research branded speakers connections lift the 150 above the norm.

There’s a choice of finishes – the silver of our test sample, or black. The latter will cost you £100 more.

There are some areas where there is room for improvement. The two large control dials fit nicely in the hand, but the input selector feels a little wobbly. That three-piece front panel looks distinctive, but one of the trio of panels wasn’t aligned exactly. It was only a touch out, but at this price, Unison Research, we’d like perfection please.

Take a look inside the metalwork and you’ll find a dual-mono hybrid circuit, which mixes valves in the input and driver stages with MOSFETs on the output stage. It’s a clear attempt to blend the fluidity and finesse of valves with plenty of muscle and grip.

Many manufacturers have tried to combine these vastly different technologies and judging by the mixed results it isn’t easy to get right. Unison Research is one of the few to do so on a consistent basis.

That Class A/B MOSFET output stage is capable of plenty of power. It has a claimed output of 150W per channel into 8 ohms that rises to a mighty 220W as impedance halves.

The Unico’s connectivity is good enough for the types of systems it’ll typically be bought for. There are a decent number of line level inputs including a pair of balanced XLRs plus a direct connection that bypasses the volume control – for use in a multichannel set-up where the volume level will be controlled by an external AV processor.

There are two pairs of speaker connections to help make biwiring easier.

The distinctive remote got a mixed reaction from our test team. For the most part, we warmed to the oddly-shaped wooden casing, but the multitude of identikit small circular buttons didn’t fare as well.

It’s a system remote, which means the vast majority are no use for the amp, plus their slightly sharp edges didn’t meet with universal approval.

Once up and running, the Unico proves an impressive unit. We connect it into our reference system using Naim’s NDS/555PS music streamer as the main source with our long serving ATC SCM50 speakers completing the set-up.

In this system the 150 comes across as something of a powerhouse – no surprise considering its generous output.

Considering the amplifier’s muscularity, large-scale classical works seem a good place to start listening. We run through Tchaikovsky’s Marché Slave Op.31 and Stravinsky’s The Rite of Spring, taking in a large dose of Dvorak in the middle. The Unison Research is a smooth performer with a lively and articulate nature, though that isn’t what grabs our attention.

We are initially drawn to the presentation’s scale and authority. It sounds huge, with plenty of headroom and the ability to play at furniture rattling levels without any obvious signs of stress.

There’s little sign of hardness as volume level head northwards, just a wall of sound that extends to completely fill one end of our listening room.

Tonally, there’s a decent balance, though the top end lacks a bit of the body and richness that makes the bass frequencies so attractive. The Unico’s sound staging is nice and wide, but lacks a little depth compared to the best we’ve heard at the price.

We move onto Nick Cave’s Push the Sky Away and love the way the Unison renders voices. There’s delicacy here and the kind of fluidity that brings to mind some of the company’s all-valve designs. It makes a decent job of rhythms too, allowing the song’s gentle momentum to build with grace.

We know there’s more detail on this track than the Unico delivers and a greater separation of instruments too, but there’s enough this amplifier does right that such shortcomings don’t concern us.

That’s particularly the case when switching to Can’t Hold Us by Macklemore & Lewis where the Unison Research responsive nature makes listening to the song a treat. The amplifier’s energetic delivery works brilliantly. There’s so much drive, it’s exciting, impressively articulate and a whole lot of fun.

Fun is a thing many high-end products overlook in the quest for ever more insight and refinement – we’re glad Unison Research hasn’t gone down that road.

The Unico 150 isn’t flawless, but it is immensely likeable. For some the size may be an issue, other may want a more transparent and precise performer, but we’re charmed by its big-hearted presentation.

See all our Unison Research reviews