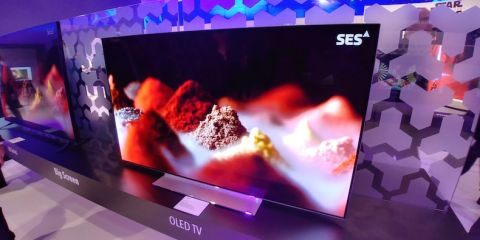 Almost a year to the day after Toshiba announced its partnership with Vestel and re-entry into the European TV market, the venerable Japanese brand announced a slew of new TVs at IFA 2017. And the line-up appears to have more variety than a Celebrations tub, from a 24in HD-ready Star Wars-themed telly (the figurative Bounty, perhaps) at one end and a 65in 4K HDR OLED (doubtless the Malteser of the lot) at the other.

The 65in X97 – announced earlier this summer – is the brand’s first 4K OLED, but the new 65X9863DB adds the all-important HDR support. And it does so wholeheartedly, supporting both HDR 10 and Dolby Vision. It’s also geared up for Hybrid Log Gamma (HLG) when it arrives.

That’s a lot of necessary ticks across the spec board for Toshiba’s 65X9863DB. And when it comes to less quantifiable judgment, too, our hopes remain high.

While older Toshiba TVs sported a rather dated-looking grid-like smart portal ­– similar to those found on Finlux sets – the OLEDs come with a very welcome refreshed menu. Similar to the layout of Samsung’s Tizen and LG’s webOS platforms, the Toshiba’s menu is an OTT pop-up bar that runs along the bottom of the screen.

The left-hand tab, which comprises ‘home’, ‘sources’, ‘live TV’, ‘settings’ and ‘apps’, determines what runs alongside it. For example, select ‘apps’ and the likes of Netflix, YouTube and Freeview Play run along the bar, with content recommendations popping up above. These can be customized, so users can add most-used tabs as handy shortcuts.

The portal also includes a ScreenShare function so you can stream video from your Android smartphone to the big(ger) screen.

The interface may not be quite as slick or sophisticated as those found on its aforementioned rivals, but it’s intuitive and certainly looks befitting of a 2017 telly – a massive improvement on the grid hub.

The Netflix app’s 4K, HDR10, and Dolby Vision content are supported, and the inclusion of Freeview Play means all the UK catch-up apps – BBC iPlayer, ITV Player, All4 and Demand 5 – are also accessible. A Toshiba spokesperson says they’re “working with” Amazon Prime Video to bring its content onboard too, but as it currently stands the 65X9863DB goes without.

Still, all three of its 2.0 HDMI inputs can accept a 4K source – such as an Ultra HD Blu-ray player, games console or set-top box – and that goes for its two USB inputs as well.

In fact, the latter is how we get our first look at the 65X9863DB’s picture capabilities. The wi-fi – or, we should say, lack of it – at Toshiba’s IFA stand means we can't access Netflix’s content as we’d have liked to. Thus, like back in the days of the first 4K demos, we are left to draw opinions from stock videos. Sigh.

Still, what we see is promising. Unsurprisingly for an OLED telly, black levels are considerably more impressive than the LCD models Toshiba is also displaying. You don't need to read its placard to tell it apart from the tens of other TVs on the showfloor. Lines are crisply etched in the manner we’ve become accustomed to from 4K screens, and the colours that leap from pitch-black backgrounds suggest the Toshiba won’t lag when it comes to brightness levels.

How well Toshiba’s processing - such as its MEMC (motion estimation/motion compensation) feature – affects its LG-sourced OLED panel compared to rivals remains unknown, but first impressions are certainly positive. Naturally, price will come into it. LG's most affordable OLEDs have set the bar high for picture performance, so the 65X9863DB is carrying certain expectations.

Toshiba has made a design decision to keep the speakers out of sight so as not to spoil the face-on appearance, which – on trend for OLED tellys – is nearly all screen. Instead, the speaker and downward-firing woofer are hidden in the rear panel’s chunkiest section.

That ample screen sits on a centrally positioned metal stand – good news for those without super-wide AV racks.

HoAudio performance remains to be heard, although - if the lion’s share of OLEDs we’ve experienced is anything to go by - an alternative sound solution would probably be recommended anyway.

The idea behind Vestel and Toshiba’s licensing deal was that Toshiba-branded TVs would sit above the budget-conscious Finlux fare also offered by Vestel, offering the latest technologies in the mid- to high-end market but filling in the gap beneath the premium £4500+ LG, Samsung, Sony and Panasonic flagships.

There’s certainly room for Toshiba to make an impression here, and we look forward to seeing whether it can make the right one with the 65X9863DB.