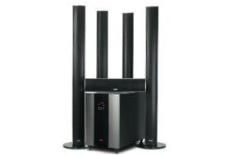 Teufel has launched a concerted attack on the UK market since its 2.1 Impaq 500 system arrived in December 2008. Now the German company has a dedicated UK website offering a 10 per cent discount on all its products, reducing this package to £944.

For this, Teufel gives you four slim, aluminium, floorstanding speakers, a horizontal centre, and a large subwoofer.

Hidden behind the mesh grilles of each speaker are four 8cm drivers. The top and bottom two cover the lower-end of the frequency range; the middle pair are dedicated to the midrange. This, Teufel says, creates a more harmonious tonal collaboration.

On this evidence, we won't argue; the sound produced is brilliantly unified, both tonally and rhythmically. They're fast, punchy, attacking and detailed, and work to produce a gapless surround field.

The centre channel, though, sounds noticeably less attacking – even a bit foggy in comparison. It lets down the seamlessness of the soundstage and lends vocals a slightly muffled quality.

Set speakers to small
Given the fairly diminutive nature of the drivers, Teufel recommends you set them as 'small' in your receiver's menus, so the sub contributes more to the upper-bass frequencies.

And it is taut and fast enough to integrate brilliantly with the satellites. But it's also rather lean, lacking the depth to do genuine justice to the pounding drums of O'Saya on the Slumdog Millionaire soundtrack.

The system's dedication to excitement and attack should be applauded, but it comes with some edginess and hardness at the top-end, and a lack of organic warmth in the midrange, making music especially rather fatiguing.

So, although the LT 3 gets an A for effort, it's a C overall.