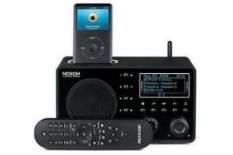 Struggling with hefty price tag and a wealth of features, the iRadio can’t quite manage to be a jack-of-all-trades

If you like features and functions, then the Terratec Noxon iRadio might just be up your street – jam-packed as it is with surely almost everything you could wish for in what is a portable radio at heart.

It's mains-powered only, so it's only so portable. When it comes to connections you'll find USB, Ethernet, lines in and out, speaker output and a digital out.

There's also room to attach your own WLAN aerial should you want to boost your radio's wireless reach.

Listening to the latest Hip-Hop and R 'n' B from Hot 108 Jamz, saccharine, slinky vocals sound crisp and clean, while detail is okay, too.

Some of the more table-vibrating basslines don't have the punch and weight we'd like, but overall the iRadio doesn't make a bad stab.

FM radio sounds suitably FM-like, and the iPod dock does what it says on the tin, pumping out a listenable if far from electrifying version of Aim's What Do People Do All Day.

It promises plenty, but the performance is just so rather than just right, and causes the price tag to become something of an issue.

Yes, it does a lot for the money – but not in the style we'd demand.