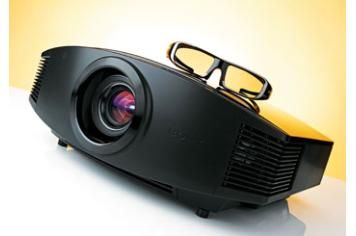 For the money-no-object, 3D-early-adopter, look no further; and for everyone else it remains mighty tempting

For our money, the ultimate home cinema experience has to have a projector at its heart.

We've seen some superb TVs in our time, from Kuros to Bravias – and some terrifyingly huge TVs, too – but nothing can quite match a home cinema projector, a screen and a darkened room for recreating the cinema experience in your own living room.

In recent months, with the rapid emergence of a new era in 3D video, we've come to realise once more that the biggest of big-screen solutions again looks likely to be the best way to enjoy this extra dimension.

After a few stolen glances at trade shows, and the odd false start with the products in our testing rooms, we've finally got our hands and eyes on the finished article in the shape of the Sony VPL-VW90ES.

You'll find two pairs of battery-powered, active-shutter 3D glasses supplied, which receive an infrared signal from the built-in 3D transmitter within the projector.

Able to convert 2D to 3D, too
If you're worried about the limited amount of 3D content that's actually available at the moment, then you'll be happy to hear that this projector can also convert standard 2D content into 3D.

There's still only a smattering of 3D material out there, but thanks to discs such as Cloudy With a Chance of Meatballs, Coraline, and the non-animated Resident Evil: Afterlife, there's enough for us to get our teeth into.

There's plenty here to play with when it comes to 3D settings. The depth adjustment allows you to experiment, on a scale of -2 to +2, with the severity of the 3D affect. Boringly we're happiest with it on 0.

You can also adjust the brightness of the 3D glasses. We settled on ‘high' – and we're fairly sure you'll want the same due to the dimming effect of the filtered glasses.

Of course, it's not a 3D-only projector, far from it. The two HDMI inputs are more than happy to take care of any of your video content.

Pretty darn good with 3D films
The 240Hz panel is joined by Motionflow technology, advanced Iris3 control for maximising contrast, plenty of picture adjustment settings and even an anamorphic zoom mode, should you want to add your own lens.

The electronically adjustable lens shift – there's a motorised lens cover, too – makes getting the picture in the right place ludicrously quick, too.

So how is that picture? With arguably the best 3D disc we've seen, Cloudy With A Chance Of Meatballs, it's pretty darn good.

The extra sense of depth is wonderfully apparent on the big-screen, making for a picture that truly delivers what can be so exciting about 3D content.

3D gaming works a treat as well
It's immersive, serves better to bring the picture to life, and there's a genuine sense of thrill and excitement watching objects seeming to fly towards you.

Issues with crosstalk are kept to a minimum, though they are occasionally apparent, while fast motion fails to knock the VPL-VW90ES off balance. We try a little 3D gaming, too, with Sony's PlayStation3 now offering the likes of MotorStorm 3D Rift and Wipeout HD in 3D.

Leaning in to the action, as you tend to do when concentrating far more than can be healthy on a computer game, again it's a real, grin-inducing experience.

Switch to the 2D-to-3D live conversion and it doesn't work quite as well, lacking the depth and solidity of image, but it's a fun little feature should you develop a 3D-addiction.

Of course you'll no doubt find yourself watching plenty of Blu-ray and DVD content that doesn't require the 3D goggles, so you'll be pleased to hear it's a fine standard projector, too.

Might we expect a little more for £6000? Perhaps – though putting a price on the 3D capability is hard to do at this stage.

Compared with some of the best projectors on the market at this price, you're paying a premium for the functionality and not getting quite the subtlety and detail, but in isolation it's an undeniably adept performer.

If you're eager to be part of the 3D action and money is no object, this is the way to do it: this Sony gives is as impressive a 3D picture as we've seen thus far.

But then this is the first 3D projector we've reviewed, and it is £6000… Bring on the competition.