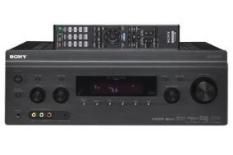 This is an amplifier in demand. Stock levels have been dropping over the past few months, leading to fears that it had become an endangered AV species.

But Sony has assured us that more than 1000 units will be winging their way to UK dealers in August. This should come as a great relief to potential customers. After all, the '2400ES was handed an glowing five-star review back in December 2008.

Part of the appeal is down to the ease of use and feature-count. The '2400ES uses Sony's Xross Media Bar (XMB) menu system. It's a slicker, more inviting system than some of the alternatives and it works well with the remote control.

Sony claims that this gives the best sonic performance when hooking up a Blu-ray or SACD player.

A few other design tweaks boost performance, including feet with off-centre-mounting screws, carefully tuned heatsinks and a stiffer, embossed chassis.

Lovely detail, power and weight
And, it doesn't take long to fall under the Sony's spell. For the money, the '2400ES produces a wonderfully open, transparent sound. The amp uncovers excellent levels of detail.

The blend of power, weight, and agility makes the Sony a very formidable machine.

It is as confident handling the (admittedly few) atmospheric moments of Rambo as it is launching two-footed into the bloody carnage at the end.

Musically, the Sony is enjoyable too. Watch Elton John's 60th birthday performance on Blu-ray and tunes sound natural and inviting.

In our original review, we found the '2400ES to be a bit of a charmer, and it's a testament to the quality of the machine that it can keep its five-star rating so many months later.