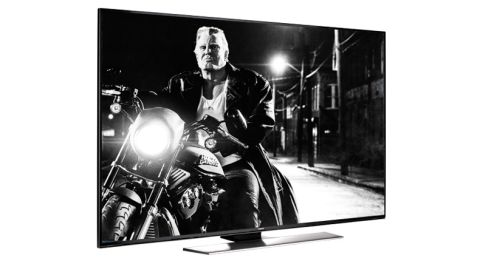 Best 60in+ TV, Awards 2014. A great 4K performance that doesn’t forget the importance of other resolutions. This is an excellent all-rounder.

The Samsung UE65HU7500 is the first of the company’s 2014 4K TVs to enter our testing rooms – and we like it so much that we’re giving it five stars.

We’ve not done that with a 4K TV before.

Some sets focus on 4K picture quality at the expense of Full HD and standard definition images.

This Samsung, however, achieves a good balance of quality across the different resolutions. Its picture is a strong all-rounder.

We’ll start with the 4K. That’s the primary reason to get one of these TVs, after all. This Samsung is fully loaded and ready to deal with Ultra High Definition video: you get HDMI 2.0 ports and the HEVC decoder that’s required for Netflix 4K streaming.

Content is still hard to obtain at this point, so we do our test using an assortment of documentary footage, generic scenery and a mixture of film clips and trailers.

We can safely say this is one of the best 4K pictures we’ve seen since we started reviewing 4K TVs.

The eight million pixels are put to good use, even with all the processing modes, filters and ‘enhancements’ turned off.

The main advantage of ultra high definition is the extra detail offered, and it’s easy to spot the difference with this TV.

It’s impressive how much texture is afforded to everything – from rose petals to Colin Farrell’s eyebrows.

Compared to the Sony KD-65X9005B, edges are sharper and better defined. The image is clean and crisp, and we struggle to find picture noise.

The big surprise for us is the colour reproduction. In the past we’ve criticised Samsung for punchy but slightly unreal colours, and it seems the company has listened.

This does not mean the picture is restrained. There’s plenty of punch to bright fruit and sunsets – just not enough to tire your eyes out during a prolonged viewing session.

Time to get past the pretty colours: we play a dark scene from Total Recall (2012) and we’re pleased to see proper, dark blacks.

They’re not ink-black like the best of plasma tech from yesteryear, but they’re black and not grey – enough to convince us of an absence of light. Best of all, dark areas don’t lose detail: there’s texture in the shadows.

On our sample, backlighting is pleasingly even and there are no distracting streaks and patches.

We switch to Blu-rays for Full HD and this is sometimes where 4K TVs trip up. After all, they have to make up 75 per cent of the information on screen. But the Samsung performs as admirably as it does in Ultra HD.

The HD picture is as crisp and detailed as we could reasonably expect, and on a par with some of the better Full HD TVs we’ve seen.

We spin the colourful and glitzy American Hustle and the image is as scintillating and as we’ve seen. Brighter hues are punchy, while skin tones stay natural and convincing.

There’s also a good grasp of motion. We switch to Freeview HD and Freesat HD, where a gardening programme provides panning shots of fields and the image moves smoothly, never stuttering.

If we look closely, it’s possible to pick out hints of grain, but sitting back (and watching like normal people), we never get the sense that it’s an upscaled HD picture.

We’re similarly impressed with the image from a 3D Blu-ray of Gravity.

The active-shutter glasses don’t cause much eye-strain and there’s a good level of detail and a convincing sense of depth as Sandra Bullock swings around in space with a load of debris.

There is a touch of instability to faster, more chaotic scenes but we think this is fairly typical.

To finish, we shift down to standard definition with a DVD of Kill Bill: Volume 2. It’s obviously blurrier and noisier, as we would expect and there’s a slight instability.

But it’s a surprisingly strong performance considering the TV is making up about 90 per cent of the picture.

It’s easy to count the lines on David Carradine’s face, and the texture of Michael Madsen’s hat is apparent. Blades (or anything else) aren’t particularly sharp, but it’s the kind of DVD performance we’d expect if watching a regular HDTV.

We’re pleased with the Samsung’s picture performance. It’s strong across 4K, HD and SD resolutions, and we could imagine ourselves enjoying it in day to day use.

Even the sound is pretty good. The Samsung doesn’t have the detail, dynamics and weight of the Sony KD-65X9005B (and its massive built-in speakers) but it’s perfectly listenable.

The sense of scale is decent, and the tonal balance is good enough that it never sounds thin or harsh. We never felt the need to reach for a soundbar (although a decent one would sound better, obviously).

Done with films and TV? Samsung doesn’t want you to stop there. The smart interface has been updated, and it’s a slicker affair than it was in 2013.

There’s a page of apps, with generous offerings including 4OD and Amazon Instant Video. Games are separated into their own page, separate from regular apps.

There’s a page for Samsung’s own on-demand films and TV shows, as well as a ‘Multimedia’ page, which gives you access to content stored on USB sticks, as well as popular online content.

Finally, the ‘On TV’ page gives shows you what’s currently available on a number of channels. There are little thumbnails of each programme and tiny status bars showing how much time remains.

Press the ‘Smart Hub’ button while you’re watching TV and a discreet row of buttons pop up on the screen as an overlay. It gives you access to your most recently used channels or the option to quit.

It’s a nice little touch that ensures you’re not immediately booted out of your programme, as many smart interfaces used to do.

The TV is easy to control, thanks to Samsung’s efforts. You get two physical remotes: a traditional button-stick and a fancy smart remote.

This has the most-used buttons and a motion-sensitive on-screen pointer, which appears as a glowing dot on the screen.

The build quality is pleasing: it’s solid and weighty without being heavy. It’s also very stable, thanks to being connected to the TV with Bluetooth. There’s no risk of a wandering cat blocking your infrared connection.

Returning is the voice control feature, which still seems a little pointless and slightly embarrassing to use. We’re not sure why we’d press a button and shout ‘mute’ when we could just press ‘mute’ in the first place.

While on the subject of silly features, we should mention ‘Football Mode’, which is being given plenty of publicity to tie in with the upcoming World Cup.

Turn this on and the TV goes a bit hyperactive, boosting the brightness and contrast of the picture and changing the tonal balance of the sound to highlight the noise from the crowd.

It’s harsh and unpleasant, not unlike watching a badly tuned set in a pub.

Don’t like the remotes? You can also use the Samsung Smart View 2 app, available free on iOS and some Android devices.

It does everything the normal remotes do, but also turns your smartphone or tablet into a second screen, where you can change channels without affecting the TV’s picture.

Aesthetically, this TV isn’t what we’d expect from Samsung (apart from the very thin borders, which are very Samsung).

We’re used to flashy designs with ostentatious frames and wide, impractical stands – but this one is very subdued.

It’s a nearly rimless screen, sitting atop a subtle pedestal.

It will happily sit on most AV racks and blend in with the rest of the furniture.

Connections are generous: you get three USBs, one of them a USB 3.0 port, four HDMIs, and one each of component, composite and scart inputs.

A 3.5mm headphone jack and a digital optical output handle audio; while there are also two satellite tuners (a main/sub configuration) and a Freeview HD tuner.

Lastly, there’s the One Connect socket. This is where you plug in a One Connect box, which bypasses the TV's connections and moves them all onto a separate unit.

The idea is that you can buy next year's One Connect box and have the latest features without upgrading your TV. In the past, Smart Evolution kits added new software and increased processing speed.

It’s got a whole bunch of sparkling features, including a neat new interface.

It’s an attractive looking set, and built practically enough for most viewing rooms.

Most importantly, however, is the performance, which is strong across 4K, HD and SD resolutions.

This is an impressive first step from Samsung this year, and we can’t wait to see what else the company has to offer.