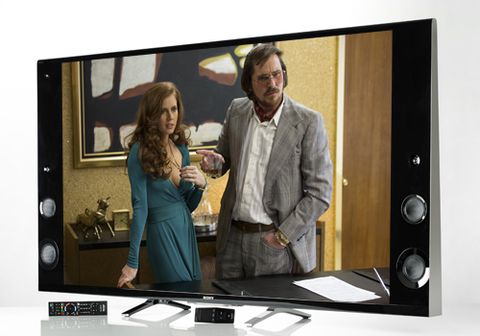 The Sony TV has its issues with upscaled content, but it’s a gorgeous set that looks great in 4K

Sony’s X9 range combines 4K resolution, a wedge design and Magnetic Fluid Speakers, and comes in 79in, 65in and 55in screen sizes.

The KD-65X9005B looks and feels every bit the premium set it aims to be.

The build quality and finish are excellent, and the way the top curves over the edge gives it an elegant touch. There’s also a Skype camera discreetly built into the panel on the left side.

The feet can slot into two different positions – either right at the end or near the middle – to make sure it will fit all rack sizes.

It’s a departure from the super-slim screens we’ve become accustomed to (and makes it a fairly heavy unit at 46kg), but it’s a well thought out design.

The thicker chassis also means there’s more space inside for bigger speakers –more on that later.

Ultra HD 4K resolution is the headline act here, and the KD-65X9005B is fitted with the latest specifications to support 4K content: HDMI 2.0 standard across all four HDMI inputs, and the HEVC/H.265 decoder that’s crucial for streaming 4K content from Netflix.

Native content is still thin on the ground, though, so Sony has provided us with a media server full of demo clips and trailers in 4K, from scenery and sports to clips from Neil Blomkamp’s latest film Elysium.

And when you fill the full 3840 x 2160 resolution with native 4K content, the 65in Sony screen comes to life. The amount of detail and clarity is brilliant (as we’d expect from eight million pixels), but it’s the colour reproduction we’re more wowed by.

Sony’s improved Triluminious picture technology is at work here, promising accurate colours and none of the overblown blues we saw in last year’s sets. And it has delivered.

From coloured pencils to exotic landscapes, the colours are as accurate as they are punchy. There’s a subtlety to each shade that’s really impressive, allowing a natural and realistic colour palette that doesn’t attempt to overdo red fruits or blue skies in any scene.

There aren’t any viewing angle issues, either. The rich colours and contrast don’t fade when viewed slightly off-axis, although we would have liked a touch more depth and subtlety to the black levels.

The edge-lit LED backlighting is just a touch uneven on our review set. It’s not strong enough to be distracting when watching films or clips on screen, but it’s a little disappointing to see on such a premium set.

While the Sony TV is capable of streaming Netflix’s 4K content (limited to House of Cards series two at the moment, Breaking Bad in June), whether you’ll be able to actually watch in 4K will depend on your broadband’s data rate – Netflix recommends at least 15 to 20 Mbps to stream 4K resolution.

Our test room’s network proved incapable of delivering the necessary speeds, with Netflix automatically down-sampling content claiming insufficient bandwidth. We were able to watch a House of Cards episode at '1080p Super HD', instead of its full 4K resolution.

It’s an impressively detailed picture for the most part, but exhibits a degree of noise and blocking on occasion.

The TVs may be ready for 4K, then, but we’ve still got a way to go before 4K content becomes widely available. Until then, most of us will be watching the usual Full HD films and TV shows, along with standard Freeview broadcast.

The Pacific Rim Blu-ray gives the Sony KD-65X9005B plenty of work in the upscaling department.

Director Guillermo del Toro throws every shade of colour into the film, with bursts of yellows, reds and greens punctuating the overall deep blue and black sets.

The 65in screen does a great job of upscaling the 1080p picture to fill the 4K resolution, with only a tiny hint of graininess present (which can be smoothed out to a certain degree using noise filters).

Setting resolution aside, the highlights of the Sony’s 4K picture are seen throughout the Full HD film: crisp, detailed picture with a skill for natural colours, especially for skin tones.

The subtle colours retain their realistic palette while also delivering rich textures and plenty of excitement. Freeview HD channels have a similar character, looking sharp and clear next to their lower-resolution channels.

But it’s not all good news. Motion isn’t as perfectly smooth as we expected, and we have to set the Motionflow processing to Standard to iron out the instabilities, which add a hint of unnatural crispness to the picture.

We also have to tinker with the picture settings to try and get the black levels as deep as possible without sacrificing the brightness and punch of white areas.

Setting Black Corrector to ‘Low’ and turning down the backlight helped adds some depth to dark scenes, but we’re still missing out on some detail in the shadows.

While we’re impressed with how Blu-ray is upscaled to 4K, we can’t say the same for DVDs. Even bearing in mind that the TV is making up 95 per cent of the picture, Inside Llewyn Davis on DVD is fuzzy around the edges.

Black areas look washed out, and while the set still manages to retain its great colour balance, the substantial drop in quality doesn’t make watching DVDs, or standard-definition broadcast, entirely comfortable to watch.

The majority of us still have large collections of DVDs and not all channels have been given the Full HD treatment, so we’d like a much better quality of picture with standard-definition.

We play test favourite Life Of Pi to test out the TV’s active-shutter 3D technology, and we're immediately impressed: the 3D is lovely to watch.

You get totally drawn in to the film, with the ocean and endless horizon providing a gorgeous and dramatic 3D depth.

The screen’s characteristics remain, and it’s a comfortable and exciting watch that doesn’t strain the eyes.

You get two pairs of active glasses with the set, and if you’ve been unconvinced with 3D films so far, this Sony’s talents might just change your mind.

We have to hand it to Sony – the KD-65X9005B sounds great. Sony’s Magnetic Fluid Speaker technology is at work here, with the thicker wedge design allowing bigger speakers to be integrated into the cabinet.

There are tweeters, woofers and subwoofers placed on either side of the screen, and the resulting sound is rich, detailed and open. Sony has certainly produced some of the best-sounding TVs we've heard.

Unlike the flatscreen TV sound we’re used to, it sounds solid and full-bodied, with no traces of harshness or thinness – we don’t feel an immediate need for an extra sound system during testing.

Turning auto surround opens up the soundfield a touch and there’s a commendable spread of sound.

It does take a smidge of that solidity away, but not so much that you lose the depth and nuance to voices. Explosions are punchy and it conveys a great sense of atmosphere whether watching broadcast TV or a Blu-ray film.

If you feel you need it, you can add a wireless Sony subwoofer for more oomph.

You get two remote control handsets with the 65X9005B: Sony’s standard remote that’s dead easy to use, and a new ‘One-Flick’ remote.

The One-Flick has a compact touchpad design with minimal buttons for easy access to certain functions. It has NFC-sharing built into it, too, so you simply have to tap a compatible device such as a Sony Xperia Z2 to connect swiftly.

We find the One-Flick remote rather disappointing, though. The finish feels cheap, the build is flimsy, and there is nothing special about it – especially when considering the quality of the 65in TV you’re using it with.

Rival smart remotes, such as those offered by Samsung, offer a far better experience. We’d stick with the standard remote for a fuss-free operation.

The KD-65X9005B’s connections are cleverly hidden away under flaps on the back panel.

Flip one open and you’ll find the four HDMI 2.0 inputs – two of which are also MHL compatible for streaming content from smartphones – and three USB ports.

There are also twin tuners – one Freeview HD tuner, and two satellite tuners in a main/sub configuration.

Under the smaller flap you’ll find the ethernet port, a hybrid component and composite set of inputs, a scart input, and a single digital optical output.

Since these inputs will be impossible to access if you’re going to wall-mount the 65X9005B, Sony has helpfully bundled in a ‘port replicator’ – a separate unit that houses the TV’s main connections – to make it easy to plug in all your sources.

We’re already fans of Sony’s redesigned smart TV portal. We’ve found it to be one of the smartest and most intuitive interfaces we’ve come across yet.

The new, mature design is neatly laid out in the main categories of TV, Movie, Music and Apps. It’s easy to flick through each panel, where you’ll find all the relevant features and apps in each category.

BBC iPlayer, YouTube, Amazon Instant and of course Netflix are all present, alongside various other apps and services.

There’s still no ITV Player or 4oD, but Sony does offer a selection of World Cup videos pulled from YouTube that you can access using the Football Mode.

Aside from being able to sift through years of World Cup video archives, turning the Football Mode on enhances the picture and sound settings to give a more ‘live audience’ vibe when watching the all-important football matches in June.

We think the motion processing is overdone in this setting, and we’re not huge fans of how the crowd noise is boosted, either.

It sounds rather harsh and unruly, and takes away from the naturally decent surround sound effect that the TV’s speakers produce.

Also new to Sony TVs this year is the Discover feature, which gives you quick access to all your favourite and most used channels and services, while also recommending related content.

It’s a neat feature that works without intruding upon your daily TV watching.

Elsewhere, the Social View button on both Sony remotes activates a scrolling Twitter feed at the bottom of the TV screen.

You can select a trending topic or enter your own keyword; it looks nice, although we think we’d still reach for our smartphones when checking Twitter updates.

There’s plenty we like about the Sony KD-65X9005B, from its stylish build to its intuitive smart features.

We particularly love how easily it displays natural and subtle hues of colour – it’s certainly one of the strong points of Sony TVs we’ve seen this year.

And when you factor in how good the TV’s speakers sound, it’s a set that we greatly enjoyed watching and listening to.

It’s not quite the unequivocal success story we were expecting from a premium set, though. While Blu-ray films and Freeview HD shows look great, they’re not perfect.

The uneven backlighting, black level and motion issues are only small niggles perhaps but, along with the not-so-great DVD upscaling quality, they do start to add up.

This set is still a stunner when you watch 4K content, though – if you can find it. If you’re determined to have the latest TV tech and want to be an early 4K adopter, this Sony KD-65X9005B is a good place to start.