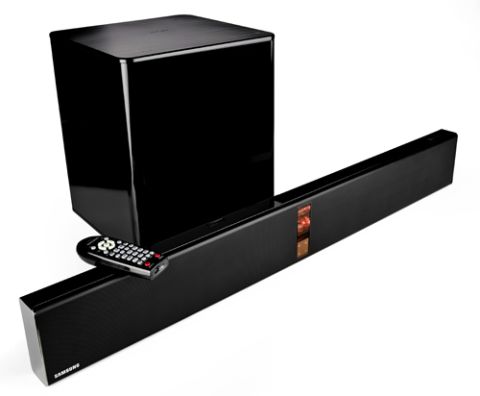 A valiant effort to bring big sound to a compact unit, but one with some performance flaws

There are not many ways to jazz up a black bar without it being distracting, so kudos to Samsung for trying.

Once powered up, a translucent glowing valve in the centre of the bar brings some interest to the black façade.

Touch buttons positioned below determine volume and input source, and a bold, readable text display shines through the grille.

It’s a smart package, designed to stand up or lie flat. It can be strapped to your wall, but – either way – the cumbersome subwoofer needs a home.

The bar’s display, which disappears during playback for minimal disturbance, moves position according to the soundbar’s posture.

This Samsung is also available in silver should the black finish of our review unit not appeal.

There’s HDMI and an optical input, as well as an HDMI output to incorporate your home cinema components.

Bluetooth is allied to a 3.5mm and USB input to hook up your smartphone or portable device for music playback too. There’s also an input for the set-up mic, which fine-tunes sound to your room.

Start connecting cables and you’ll find it’s more awkward than it should be. Accommodating our HDMI cables into both output and input terminals is fiddly and makes it hard to lay the unit flat.

A well-equipped remote can be set up to control a Samsung TV too. If you don’t have one, though, a third of its buttons are idle and the more-the-merrier layout makes it seem unnecessarily cluttered.

A Blu-ray disc of Frankenweenie kicks off our testing and sound is very listenable. There are six equaliser sound modes to flick through (Music, News, Drama, Cinema, Sports and Gaming), but we prefer the standard setting.

There’s realistic scraping when chalk drags down slated board and a texture to the grass sound as a football rolls across it.

Finer details often fall between the cracks, though.

Load up Pacific Rim on Blu-ray and you have to perk up your ears to detect bicycle bells as they hurtle past pedestrians on the streets of Tokyo.

Without doubt, action-packed, explosive blockbusters are the Samsung’s strong point. It has a mammoth sound.

The sense of power as machinery clunks is colossal.

It isn’t of the same magnitude or immersion that Yamaha’s YSP range achieves though – even with 3D Sound Plus on – and bass could do with more grip too.

Footsteps of machines feel restrained and thunder doesn’t reverberate, as we’d like. We were disappointed to discover the subwoofer was definitely on.

Voices struggle to shake some colouration too. Swap back to Tim Burton’s animation and Winona Ryder’s voiceover has an unnatural tinge to it.

With Red Hot Chili Peppers’ By The Way album, the tone is balanced, but vocal delivery is quick to overlook Anthony Keidis’ gruffness.

Had £100 been shaved off the price, we could be looking at a four-star soundbar.

It has room-filling sound and plenty of insight compared to most TVs.

Its striking looks get our approval too. But bass is disappointingly mellow and there are more talented all-rounders out there around the £500 mark.