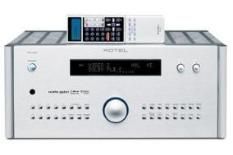 We don’t mind the missing bells-and-whistles, but we do mind that this isn’t quite an audio all-rounder

Our introduction to Rotel's new flagship 15 series of home cinema amps came just two issues ago, when we gave the £1400 RSX-1550 the First Test treatment.

Despite its comparative lack of bells and whistles (only five channels of inbuilt power amplification), it
ran away with five stars thanks to a superb sound performance.

It would be reasonable to expect this higher-end RSX-1560 model to add those luxuries while remaining fairly static in the sonics, but that's not the case.

Sure, you do get those extra two channels of amplification, making 7.1 systems feasible, but Ethernet remains elusive, as does automatic speaker calibration.

We're not actually going to respond critically to those two no-shows. After all, we reckon it's
a minority who want to stream music to their receiver, and we always recommend using a test tone and sound pressure level metre to properly calibrate your speakers anyway.

Besides, the important specs are already there - you get full HD audio decoding, four HDMIs in and one out, as well as video upscaling to 1080p.

Big and bold in every way
So, if the extras haven't massively increased, what does the £500 premium over the RSX-1550 get you?

Well, other than an even bigger unit, which is just as neatly styled and solidly built as the smaller model, the big news is Class D amplification at 100W per channel (as opposed to the 75W A/B amplification of the '1550.)

Needless to say, this is a substantial change, and it makes a big difference to audio performance.

Playing the brilliant stampede scene from the otherwise patchy Australia Blu-ray is an exercise in detailed destruction, with individual hoof falls distinguishable in the surround field with terrific definition and punch, but without spoiling the overall scale, weight and drama of the scene as a whole.

The shouts of Hugh Jackman's character, Drover, come through clearly in the maelstrom, and when the noise of the herd falls away to be replaced by the chanting of little Nullah, the amplifier has all the focus and insight to reveal the fear and magic in his voice.

It's not all perfect, though, and the midrange and treble, though exciting, also exhibit some hardness and sibilance that the '1550 avoided.

This makes voices sound slightly thin and less nuanced than the very best, and results in a less subtle performance overall.

This is true of music, too, with the 5.1 PCM version of Learn to Fly on the Foo Fighters: Live at Wembley Stadium Blu-ray sounding spacious, punchy and detailed, but also a touch harsh.

Similar story with CD
Plug a CD player in and the stereo performance proves much the same.

The surprisingly large instrumental ensemble of Tori Amos' Cornflake Girl is given a wide yet precise and detailed soundstage with great bottom-end weight, but a top-end with a touch of sibilance.

So, the RSX-1560 improves on its little brother in many ways, but isn't better all-round.

What's more, a little company called Sony released the STR-DA5400ES amplifier last month - and that's
a tough rival for both of them.