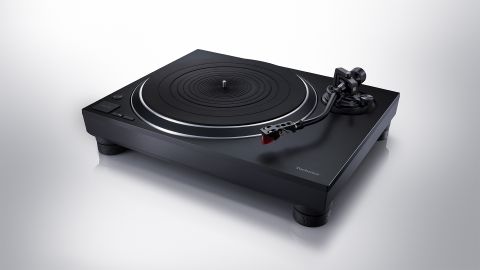 The rebirth of the Technics brand has been fascinating. Since 2014, the brand has released a steady stream of products with varying degrees of success, but there are now signs that it is truly hitting its stride.

The high-end SL-1000R turntable, introduced in early 2018, was the first product to confirm that the brand really could deliver. We were so impressed that’s it’s now become our reference record player. That good work has continued with the SL-1500C, the company’s brand new entry-level deck.

This is a less elaborate mini-me of the high-end model, still using a core-less direct drive motor with sophisticated speed management circuitry, a hefty, well-damped chassis and a version of the company’s long-running S-shaped arm.

It comes supplied with the well-respected Ortofon 2M Red (£95 if bought separately) and is equipped with a built-in phono stage. There’s even a switchable auto-lift function that takes the stylus off the record once the end of side has been reached. It takes around ten revolutions for this to kick-in, so don’t worry if it doesn’t happen as soon at the stylus tip reaches the run-out groove.

Technics has been obsessive about the engineering details on the SL-1500C. That motor is designed to avoid issues such as clogging and the speed control uses techniques first developed for parent company Panasonic's Blu-ray players to help with stability and accuracy. The platter is made of aluminium, but damped on the underside with rubber to control resonances.

Even the plinth is more sophisticated than its clean-cut appearance suggests. It uses a combination of aluminium, ABS and glass fibre to achieve the mix of rigidity and vibration control required to allow the turntable to do its job properly. There are two finish options, silver and black.

The overall standard of build is impressive. The SL-1500C feels solid and well engineered with a pleasing sense of precision to the way everything works. Press the large stop/start button and the platter spins up quickly and without the fuss and judder that most belt-driven rivals suffer from.

We’re impressed by the lack of free-play in the arm’s bearings and its smoothness of movement. We like that it’s possible to change the arm height easily, something that helps to optimise the performance with different cartridges, should you change the supplied one.

That detachable headshell may not please purists that feel absolute rigidity in the arm tube is essential, but it does make the task of fitting and swapping cartridges so much easier. Just twist the collar to unlock the headshell, and off it comes.

Set-up is easy. Once the deck is out of the packaging just fit the platter, attach the headshell and set the tracking weight (1.8g) and bias to match. The Ortofon cartridge is already fitted to the headshell and aligned. As with any turntable, a level, low resonance support is ideal, and you’ll get the best results with the SL-1500C positioned well away from the speakers.

Surprise number one is that the built-in phono stage is really good. That doesn’t tend to be the case normally, and means that you don’t have to spend extra on a dedicated outboard unit to get the best from the record player. The phono stage is intended for use with moving magnet cartridges, but should work just fine with high output moving coils too, should the itch to upgrade strike.

The SL-1500C package, as supplied, is one of the best sounding we’ve heard at this price. It has a clean and precise presentation, one that defines the leading and trailing edges of notes with impressive skill. We listen to Orff’s Carmina Burana and are impressed with the stability and focus of the SL-1500C’s sound. The presentation is composed and organised, and able to track the music’s multitude of instrumental strands with considerable skill.

The turntable’s handling of dynamic shifts is pleasing too. There are moments of absolute carnage in this recording and the Technics takes it all in stride, delivering crescendos with enthusiasm. But in the quieter movements there’s still a light enough touch to convey the nuances that make this piece so enthralling.

We’re impressed by the SL-1500C’s sonic agility; the way it resolves plenty of detail and manages to deliver all that information in a cohesive and musical whole. There are few rivals below the grand mark that do it better.

The cartridge is mostly responsible for the tonal balance, and the Ortofon does a fine job of keeping things even and convincing. The 2M Red is a well-proven quantity that we’ve heard perform well on many decks over the years. It’s a fine choice for the SL-1500C package.

We switch to Nitin Sawhney’s Prophesy set and the Technics revels in the album’s complex rhythms and thickly layered production. There’s plenty of punch here, particularly at bass frequencies where the deck delivers an impressive combination of agility, punch and depth.

This is confirmed when we compare the Technics to our current favourite at this level, the Rega Planar 3/Elys 2 (£649). Once you add the price of a decent phono stage to the Rega, the two cost broadly the same. Yet, in many ways they’re aimed at different users.

The Rega is a purist design, stripped back to concentrate on the engineering fundamentals. It’s fully manual, doesn’t include a phono stage while the Technics has electronic speed control – 33 1/3, 45 and 78rpm – and feels like a more luxurious item overall. It’s the option those not totally engrossed in vinyl would probably prefer to use.

Compare the sound of the two and it’s obvious that the Rega is even subtler and more insightful. It renders levels of sonic texture, dynamic subtlety and rhythmic cohesion that even the hugely capable Technics can’t match. But, it’s not all one-way traffic. The SL-1500C’s presentation is crisper and has better defined leading edges while at low frequencies it makes the Planar 3 sound a little soft and ill defined.

That the Technics can go toe-to-toe with the Planar 3 and can still stand tall is impressive indeed. That doesn’t happen very often. The SL-1500C is a beautifully made, fuss–free record player that sounds great. If Rega’s back-to-basics approach doesn’t appeal, this is a brilliant alternative and highly recommended.