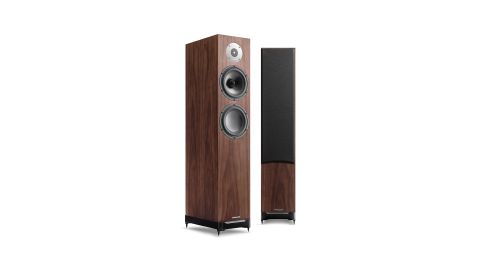 Partner the D7.2s with well matched electronics and they’re about as transparent as speakers get at this level

We reviewed the Spendor’s original D7s back in 2013. At the time we loved the slim floorstanders' combination of cut-glass clarity and natural dynamics, while also appreciating their classy appearance.

Seven years on, we have the D7.2s before us, and it seems that the company has played it rather safe with this update. But is it too safe?

We doubt whether many could identify this new version on sight. But delve deeper and it’s clear that Spendor’s engineers haven’t spent the past few years twiddling their collective fingers. The big changes are under the skin and, in truth, not particularly headline-grabbing. The cumulative result, however, is that they improve an already excellent product.

The company has done a lot of work in that slender, 95cm tall cabinet. It’s always been a solid and well-damped enclosure but the engineers have worked hard at revising the bracing (now asymmetric) and have further refined the use of the small, low mass constrained polymer dampers that are used between the bracing and cabinet panels. The new structure is claimed to be far more rigid than before, providing a better foundation for the drive units to work from.

It’s a beautifully made box, too, with crisp edges and a carefully applied, real wood veneer. There are five options for the finish – black ash, cherry, dark walnut, natural oak and satin white – so there should be something suitable for most rooms. It helps that the magnetically held grilles are shaped so that the speaker’s sound doesn’t degrade much when they are used.

The tweeter remains the distinctive LPZ (Linear Pressure Zone) unit. This is built around the eye-catching circular stainless steel front plate, which forms a damped acoustic chamber in front of the woven polyamide diaphragm. The idea is that the tweeter diaphragm experiences the same air pressure conditions from both sides, and so works more linearly. In addition, the front plate’s hole pattern and solid centre are claimed to help minimise phase issues, improve focus and deliver wide dispersion.

These floorstanders remain a two-and-a-half-way design, where a Kevlar composite bass unit augments the output of the centrally mounted EP77 polymer-coned mid/bass. Both of these 18cm drivers are carried over from the original but have been lightly refined for this application. The crossover points are unchanged at 900Hz in the bass and 3.2kHz for the mid to treble transition.

Unusually, the cabinet is free from the acoustic filling that traditionally absorbs the bass driver’s rearward output. Spendor claims that this omission gives advantages in low-frequency precision and agility. The thinking is that the damping may absorb the unwanted sound energy but releases it out of time with the music, so slowing and blurring the results.

The speaker’s bass output is tuned by the latest generation of Spendor’s linear flow port. This is a carefully shaped twin-venturi design. The claim for this elaborate port design is that it delivers low frequencies with an agility that traditional plastic tube alternatives can’t match. This design is also supposed to make the D7.2 less fussy about their proximity to a rear wall.

The latter claim is easy enough to check and does ring true, with the Spendor’s proving unusually accommodating of placement. This says much for the dispersion of that unusual tweeter design, too.

The optimum position in our medium-sized test room proves to be an entirely conventional 75cm from the rear wall with a bit of angle towards the listening position. The benefit of this speaker’s carefully considered design, though, is that things don’t fall apart if you have to deviate from the ideal.

But these towers are fussy about partnering equipment. They’re highly transparent performers that readily reveal the sonic traits of the partnering system. Depending on the quality of the system electronics, that can be good or bad.

While the D7.2s don’t go out of their way to be rude, if your system electronics are bright or edgy you’ll know all about it. We had no issue with our reference set-up of Naim ND 555/555 PS DR music streamer, Technics SL-1000R record player and Burmester 088/911 Mk III pre/power, but that's to be expected given the excellent balance of each component.

Despite what a claimed power handling of 200W may suggest, the D7.2’s 90dB/W/m sensitivity and nominal 8ohm impedance means that they don’t need lots of power to shine. Spendor is usually careful to ensure that its speakers aren’t an electrically difficult load for an amplifier to drive, and that seems to be true here.

Our review D7.2 samples took a few days to come on song. Straight from the box they sound a little too thin and forward for our tastes, but things mellow out over time.

Even then, these could never be described as easy-going. They’re taut, agile and about as responsive as speakers get at this level. This much is made obvious within the first few bars of New Slaves by Kanye West. This song hits hard and the Spendors are happy to oblige.

We’re really impressed by the Spendors' speed here and their ability to kick hard when required. They sound wonderfully composed too, staying organised and rhythmically coherent even at higher levels.

There’s plenty of finesse too. West’s vocals come through with clarity and passion, each word spat out with venom. It’s easy to follow every word and, just as importantly, his voice is rendered with convincing texture and body. It sounds natural and expressive.

We switch to Holst’s Jupiter and the Spendors respond with glee. We’re struck by their even-handed tonality and the seamless integration between the drivers. It’s obvious that the engineers have spent a lot of time matching the drive units and calibrating the crossover.

The D7.2’s render an expansive and nicely layered sound stage - one that is populated by precisely focussed sounds and instruments. The overall stability of the presentation doesn’t waver no matter how complex the music gets.

We’re impressed by their pleasing sense of scale and, considering their comparatively modest dimensions, the sonic authority on offer. It helps that the D7.2s don’t shirk from delivering large dynamic swings, rendering the music’s full-throttle crescendos with enthusiasm.

Change down a gear or three to the slow burn of Death Cab For Cutie's Brothers On A Hotel Bed and the D7.2s still shine. It’s a highly resolved sound but one that stays coherent and rhythmically surefooted. If you want to analyse the recording you can but, if partnered with a bit of care, these speakers will also let you simply sit back and enjoy.

That’s the key to these towers: they do need more pampering than we’re used to giving Spendors, but much of this has to do with their impressive transparency and resolving power.

But make the effort and get it right and we doubt you’ll find a more capable alternative for the money.