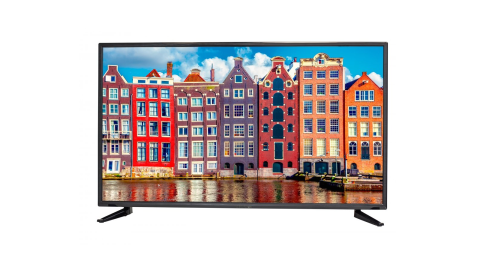 The 50-inch Spectre X515BV-FSR offers lots of screen for your money, but the picture performance is too compromised

The Sceptre 50in X515BV-FSR is a cheap TV with very little to shout about. In today's world of smart TVs and 4K sets, this 1080p TV without smart functionality feels like a real blast from the past.

That's not to say that it's a bad TV. But even with its sub-$200 price, this TV is likely to have limited appeal.

As you’d probably expect at this price, the Sceptre X515BV-FSR is a 50-inch TV that’s made largely out of plastic. Its design is functional rather than anything else, and it’s pretty chunky by today’s standards too.

Its stand is made up of two black plastic feet that screw onto the bottom of the set at either end. These boomerang-shaped feet offer pretty good stability on a table or entertainment unit – you’ll just need to ensure its around 44 inches wide in order for the TV to fit.

If you’d prefer to wall mount, the X505BV-FSR has a standard four-hole mounting pattern that will work with any 200 x 200mm VESA wall bracket.

The X515BV-FSR is fitted with both TV and PC monitor connections, so you can use it as either a TV or a computer monitor – or both, if you’re so inclined.

On the back panel you'll find a reasonable selection of inputs, including three HDMIs, a coax connection for antenna or cable, a shared composite and component video input, a VGA connection, and a 3.5mm audio input for connecting PC audio.

As the Sceptre doesn’t do the smart stuff, there’s no sign of an ethernet port or any built-in wi-fi here. A single USB 2.0 port for plugging in a flash drive is about as modern as it gets around here.

As for outputs, you can expect a pair of RCAs for stereo sound, a 3.5mm headphone jack (but no Bluetooth for wireless headphones), and an SPDIF optical connection for digital surround sound.

The remote control that comes with the X515BV-FSR is as basic as the TV it serves, and includes the expected channel and volume controls, a number pad for entering individual channels, plus a basic four-button navigation pad.

Considering there’s no smart functionality, there’s no need for much more, and it does the job just fine.

At this price for a screen this size, the Sceptre offers a better-than-average picture performance, but don’t get your hopes up too much. With a 1080p resolution and 60fps refresh rate, the specs alone should make you temper your expectations – and yet we are still feeling let down by its performance when we get in front of it.

Whether we are watching over-the-air TV channels or scenes from Blade Runner 2049, there are some glaring issues that are impossible to ignore.

Backlighting is the first. We fully expect TVs in this price bracket to fall short of complete uniformity, but the problems here are worse than we'd imagined. Shadowy corners are offset against a strange glow of excessive brightness coming from the outer edges of the display, all of which is very distracting indeed.

The second issue is one we see regularly in TVs of this ilk, but it doesn’t make it any less undesirable. In areas of densely packed detail – say, stubble on a face, or patterns on clothing – there is a noticeable sizzle effect on screen. You only need to throw in a bit of average motion and this effect gets all the worse.

Colors are bright but accuracy is often off, and more so than we’ve seen in similarly priced sets. While yellows can skew green, there’s also a pronounced blue tinge to a lot of colours. Skin tones often suffer worst from this - occasionally people look very unwell indeed.

Gamers will at least be pleased with the input lag time of 29ms, even though they'll probably be much less enamoured with what the TV does to the look of their games.

Contrary to the picture performance, the Spectre’s sound quality isn't bad at all for this level, without even a hint of chassis rattle – even at full volume.

Listening to Vampire Weekend’s This Life, the TV’s two 10-watt speakers manage a decent sound output, but start to sound pushed when nudged upwards of around 70%. That said, bass is considerably lacking.

For those on a strict and tight budget, there’s little doubt that the Sceptre X515BV-FSR is a bargain larger screen TV.

But any experienced bargain hound knows that low prices come with caveats, and in this case it's a weak picture performance that suffers from poor backlighting, questionable image processing and some noticeably skewed color.

If you’re simply looking for a the biggest TV you can buy for very little money, the Sceptre will obviously appear on your shortlist, but we’d suggest saving a little longer and spending your money on a better screen, even if it's a bit smaller.