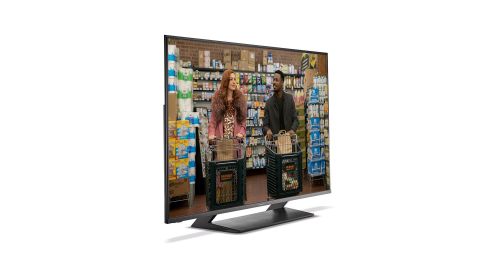 How realistic should movies look in your living room? Panasonic claims its latest TV set, the TX-40GX800 will make them look exactly as intended, or at least how black levels, colours and brightness ought to be.

Panasonic collaborated with Hollywood colourist Stefan Sonnefeld in the creation of the HCX processor for its top-of-the-line 2018 OLED TVs. One year later, that same bundle of silicon is now the beating heart of the GX800 range.

But the Panasonic TX-40GX800 is no OLED; it’s just a plain old LED – and an edge-lit LED at that. While that makes for a nice, thin panel, we don’t expect it to have quite the same close control of zonal lighting that you’d get with a direct-lit model.

For a 40in TV at this price point, we would expect a good-looking 4K set with as much HDR codec support as possible and we might also hope that Dolby Atmos featured. Thankfully, the Panasonic TX-40GX800 does all of this. Throw in some solid picture performance and we should have a real hit on our hands.

There are a lot of ugly TVs at the lower end of the market, but the Panasonic TX-40GX800 is not one of them.

With the same, low profile stand as many of the upper-end Panasonic sets, a minimal bezel and a panel that starts off super thin at the top, it’s a set you can be proud of aesthetically.

The remote is Panasonic’s standard issue; it’s nothing fancy but perfectly practical. Likewise, the TV’s OS is equally effective, if a little basic. Called My Home Screen 4.0, it has a decent EPG, inputs are easy to switch and the smart platform comes fitted with Netflix, Prime Video, Rakuten and all the catch-up services, courtesy of Freeview Play.

Around the back, the connections include three HDMIs, two USB 2.0s and a USB 3.0. There’s also an optical port and an HDMI ARC feature that will come in handy for connecting a soundbar. As for HDR compatibility, it’s a full house of HDR10, HDR10+, Dolby Vision and HLG.

The Panasonic TX-40GX800 lost out to the Samsung UE43RU7470 for a 2019 What Hi-Fi? Award. The Samsung has a less elegant stand, chunkier bezels and doesn’t go quite as bright but, on balance, has a more refined picture. It’s also a little bigger and about £150 cheaper at the time of writing, but to immediately discount this Panasonic would be a little premature.

Watching Harry Potter And The Order Of The Phoenix, we get bags of drama from the Panasonic’s picture. The scorched summer turf at the opening of the film looks nicely complex, thanks to this TV’s handling of the 4K HDR footage. As the dementors make their attack on Harry and Dudley, the sky becomes suitably foreboding.

The TX-40GX800 also does an excellent job producing punchy, vibrant colours. Professor Umbridge’s kitten clad study hits a marvellous pink. The stone walls behind her are nicely cracked and the blue pattern and gold trim of her bone china cup are spot on.

However, as entertaining an image as it is, the longer we watch, the more it becomes apparent that the TX-40GX800 lacks some subtlety and close control. It’s a classic compromise of edge-lit panel technology and it manifests itself in a few different ways.

Scenes of mixed lighting become overblown. For example, in the forest scenes, the dappling of the sunshine can be too harsh. Instead of looking like sunshine, parts of the picture appear as if they’re under spotlights while the rest is far darker than it should be.

And for all of Umbridge’s colour vibrancy and balance across the palette, there could be more variation within those tones. The TX-40GX800 can’t quite manage the true texture of her velvet cravat in the same superb way as the Samsung UE43RU7470. It’s a thin fault line that runs through what is otherwise a stellar performance. Another issue is that the viewing angles on this Panasonic aren’t the best. Start moving off axis, and both colours and black levels fade out.

We drop down to SDR with Captain America: The Winter Soldier and the picture is largely pleasing, although we alter the colour settings slightly to rebalance the palette and make Cap look a little less like he’s wearing lipstick. Detail is strong, thanks to some quality upscaling, but a few more problems arise.

It tends to go a little blurry in moments of high motion when the image is dark – such as the fight scene on the ship deck – showing that this panel is not the best at holding levels of upscaled detail. Blacks often look a little green with SDR too. Given that 4K is still far from the majority of most people’s content, these problems feel significant, especially at lower price points where we suspect they’ll receive even more lower resolution material.

We switch to a nature programme shot in Nepal and, despite this screen’s limitations, it’s a reminder that it can still create a really entertaining image. The Himalayan monks’ display of multi-coloured calcite powder art shows this set off at it’s punchiest, most vivid best. There’s plenty of granular detail in the kaleidoscopic colours and the Himalayan backdrop makes the mountains look as alluring and dangerous as we imagine them to be.

The Panasonic TX-40GX800 won’t blow your mind, sonically speaking. There’s not much of a speaker cabinet for the two 10W drivers and, understandably, there’s not an awful lot of depth to the sound in terms of tone and dynamics. It’s all pretty thin, but it is even and balanced and there’s a lot to be said for that.

There’s an excellent range of different audio modes and presets. We stick with Standard, but also switch Bass Boost and Dialogue Enhancement on. With these in operation, you’ll get the best of the big hits but won’t struggle to hear what the characters are saying – we’ll take that over other audio qualities any day.

Play Dolby Atmos-compatible content and the Panasonic can throw the sound out a little further. While the soundstage never really gets even close to enveloping you, that’s only to be expected at this price.

This is a good TV with the typical problems you might get at this price. It could be more refined and scale a little better when conditions get tough, but otherwise it’s bright, punchy and entertaining.

The Panasonic's real problem, though, is that the slightly bigger and slightly better Samsung UE43RU7470 is also a fair bit more affordable.