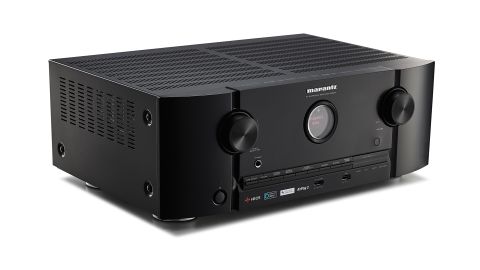 It might appear to be merely a masked Denon, but the Marantz SR5014 has a pleasant character all of its own

“What lady is that, which doth enrich the hand of yonder knight?” asks Romeo of a servant at Lord Capulet’s masquerade ball. “Did my heart love till now? Forswear it, sight! For I ne’er saw true beauty till this night.”

Our affections for this home cinema amplifier may not be quite as passionate as Romeo’s for Juliet – nor does this relationship come to a violent end – but it is not long before the Marantz SR5014’s disguise slips and we fall for the familiar character that lives beneath the mask.

This amp isn’t exactly the same as those Award-winning contributions from Denon, the other major audio brand with which Marantz is entwined, but it is unmistakably a close relative. You need only look to the rear of the chassis to find a board of connections near identical in breadth and layout to the former company’s outgoing AVR-X3500H receiver.

With the latest version of that model, the AVR-X3600H, raising the bar in terms of channels, and also its price, this Marantz SR5014 immediately sets out its stall as being the way to achieve a 180W-per-channel, 7.2 system for only £849.

There are the same eight HDMI inputs, one of those on the front for easy access, with HDCP 2.3 support for 4K Ultra HD, Dolby Vision, HLG, HDR10 and 3D pass-through. eARC (Enhanced Audio Return Channel), which allows the lossless transmission of surround sound formats (such as Dolby TrueHD and Atmos) from TV apps using a single HDMI cable, is also supported.

Marantz has also included digital audio inputs, with two optical and another pair of coaxial connections, while its five analogue ins includes a phono pre-amp for those wishing to use the SR5014 with a turntable. That might be where you choose to use the amp with a second zone, which facilitates stereo playback in another room while using your sound package to play a film in the main zone.

In terms of audio technologies, the SR5014 is compatible with Dolby Atmos and DTS, as well as Dolby Atmos Height Virtualization Technology and DTS Virtual:X. The latter pair aims to imitate the effect of height channels for those without dedicated speakers.

It is also part of the HEOS network, meaning you can use the receiver as a hi-res multi-room hub, and it can be used in conjunction with your chosen voice assistant by bolting on any speaker or device with it built in.

For wireless streaming direct from a smartphone, tablet or laptop, there is both Bluetooth and Apple AirPlay 2. A future update will also introduce Bluetooth headphone transmission, allowing you to connect a pair of wireless cans to be used concurrently with your speaker package. This shrewd solution means volumes needn’t be raised too high in the main room.

Even the menus will be familiar to anyone who has previously used a Denon AVR, and the Marantz also uses the same slick Audyssey software to set channel levels via the use of a microphone that comes included in the box.

A few minutes into listening, and you’ll hear the work of Marantz’s tuning that sets this SR5014 apart from its extended family members. It is not chalk and cheese, but still this is a sonic presentation very much of its own.

Our first impression is of just how smooth the SR5014 sounds. Balance is smooth – we’re not talking a grand rolling off of treble frequencies – but Marantz has made sure to sand down any coarseness or sharp edges.

That is complemented by a full-bodied lower midrange and bass response. It is more than enough to make our sofa shake, but the presentation is coated with a pleasant warmth that pads out voices and gives cinematic feel to densely laden soundtracks.

There is also plenty of detail, and while the SR5014’s power is enough to hold us in our seats, it is not without nuance. There is texture to what we hear, a definite sense of the space available in a scene, and confident yet careful placing of each sound within an impressively immersive soundstage.

However, what lets the SR5014 down is where that smoothness turns to softness. Compared with its Denon cousins – for those are our current mid-range class leaders – it doesn’t hold quite the same punch, precision or agility.

While we’re all for Marantz’s smoother presentation – this is an amp that will never fatigue your ears – we often long for the sharper jabs of the AVR-X3600H, or the AVR-X2600H below it, as well as its snappier timing and more expressive dynamics.

We are not talking giant leaps though. The SR5014 is by no means dull, but it often eschews the intricacies of more lilting phrases; character is not entirely lost, it’s just that we get a more rounded portrait from current class leaders.

So while it isn’t quite Romeo And Juliet, the Marantz SR5014 has a character that can be admired. For those seeking a powerful and smooth 7.2-channel amplifier for under a grand, it has to be near the top of the list. What it does well, it does very well indeed.