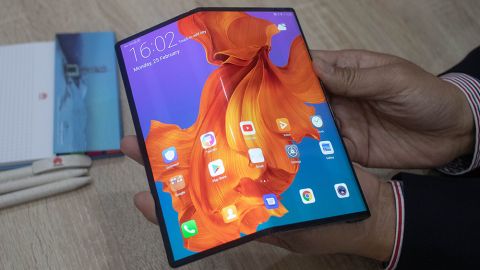 Samsung’s Galaxy Fold could only hog the foldable phone spotlight for a few days before rival smartphone brands announced their own foldable proposals at Mobile World Congress 2019 on the weekend.

One of those bendy blow-ins was Huawei’s Mate X, which is fully foldable, 5G ready and arguably the most exciting of the lot.

Our colleagues at TechRadar have been hands-on with the new Huawei Mate X at MWC 2019 for some quick first impressions...

But first, the elephant in the room: price. The Mate X costs €2299 (around $2600/£2000, then) - nearly three times more than any of the Chinese manufacturer’s previous handsets, and almost making the $1980 Samsung Galaxy Fold seem – yikes – affordable.

Indeed, it seems only yesterday the internet was fretting over Apple breaking through the £1000/$1000 barrier with its iPhone X…

Still, Huawei has hinted there could be another variant after, or even by the time, the Mate X launches in the middle of the year. And besides, we’re used to innovation costing.

Thankfully, innovation is exactly what Huawei appears to be delivering with its next flagship.

The 5G 2-in-1 foldable phone’s headline act is, invariably, its screen design, which sees a 6.6in FullView OLED display unfold like a book to a more tablet-like size of 8ins.

To unfurl the extra screen real estate, you need simply press a button on the back of the phone to release the back portion of the display. What’s immediately impressive is the front of the phone’s screen size, a full 6.6in compared to the Samsung Galaxy Fold’s modest 4.6in front display framed by beefy bezels.

The back portion creates a second 6.4in screen that’s thinner (it remains 5.4mm-thick when unfolded), which can be used individually or in unison with the front display for, say, watching videos in a 21:9 aspect ratio.

A vertical bar hugs the left of the rear screen, housing everything from the internals to the triple-camera system to the power button/fingerprint scanner combo to the USB-C charging port.

Huawei doesn’t want you to worry about the durability of the proprietary Falcon Wing hinge mechanism between the two screens. The Mate X screen has allegedly endured 100,000 folds in lab-condition stress tests.

That seems believable considering the handset defies its thinness to feel reassuringly solid, but we can only hope that both the hinge mechanism and release button can withstand the daily grind for a number of years.

Powered by a Kirin 980 processor coupled with a Balong 5000 5G modem, the phone’s 5G capability sees a 1GB movie download in just three seconds. That’s super speedy of course, although it’ll be some time after the phone launches before we see networks capable of such download rates. Still, it’s nice to know the Mate X is capable of such haste.

Naturally, such performance and screen demands flag warning signs over battery performance. But thankfully, Huawei has packed two batteries inside the Mate X for a whopping combined power of 4500mAh.

That spec is nicely bolstered by Huawei's brand-new 55W SuperCharge technology, which can re-juice the Mate X from 0% to to 85% in just 30 minutes.

Getting down to the nitty-gritty specs, the Mate X’s 512GB of internal storage can be expanded by up to 256GB via Huawei’s proprietary Nano Memory card.

Running a customised version of Android with an interface that optimises itself for tablet or phone orientation in milliseconds, the Mate X's operation appears very smooth indeed.

EMUI, Huawei’s custom skin that sits atop Android, introduces some core 2-in-1 features, such as split-screen multitasking. Could we even see a desktop-tailored OS experience down the line? After all, Huawei CEO Richard Yu said the Mate X in tablet form would be ideal for mouse and keyboard accessorising for document editing…

Camera details on the Mate X’s trio of lenses are currently thin on the ground and opening the camera app was forbidden in the hands-on session, but we can still make observations on some of the snapper's skills.

As was revealed in the press conference, there is no front camera, just a primary triple camera arrangement of re-designed Leica lenses around the back. If you’re sat there thinking “wait, how will I take my daily selfie?,” fear not - the flexibility of the foldable design means the single system can play the roles of both front and rear cameras. Considering rear cameras are almost always superior in resolution and quality anyway, this actually seems like a positive move.

Of course, it’s very early days for the Huawei Mate X, and foldable phones in general. There are reasonable reservations regarding durability that could only be put to bed after living with the handset for a few months, and the jury is out on camera and audio performance. On the latter, no-one appears to know whether it even has a headphone jack due to limited access. Naturally, attached to such a staggering price tag, this isn’t exactly a phone for the masses either.

But as first impressions go, the Mate X edges nearer to a well-rounded reality than a pie-in-the-sky concept – impressive considering it’s still a few months from hitting the market – and is certainly one of the 2019 handsets we most look forward to getting our mitts on again later this year.