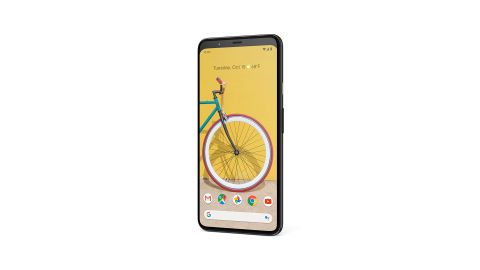 Google is now well into its smartphone stride, releasing a new model in the Pixel range every year to keep pace with Apple and Samsung. The Pixel 4 XL is the new big brother in the line-up, aiming to propel Google into serious contention when it comes to global smartphone market share.

Of course, the company has long had the interface side of things tied-up with its Android OS and once again the Pixel 4 XL aims to deliver the best Android phone experience, bar none. There are neat new features, including the introduction of Face ID, upgrades to the already excellent camera, an new AMOLED screen, bigger battery and upgraded processor.

Google has kept the Pixel 4 XL and Pixel 4 at relatively affordable prices, making them a tempting alternative to the likes of the Samsung Galaxy S10+ and iPhone 11. But with cheaper options such as the OnePlus 7 Pro out there, can the Google Pixel 4 XL rise above the pack?

The  4 XL has the same 6.3-inch OLED screen as its predecessor, the Pixel 3 XL, but the profile has been given a slight tweak. It’s narrower but longer, by around 2mm in each direction. This leaves you with slightly less screen real estate, meaning a fraction higher pixel per inch ratio from the same QHD+ 3040 x 1440 resolution.

Finding the perfect phone size is of course a personal affair but we can’t help thinking we’d rather have the top of the screen in closer reach – the Pixel 4 XL is longer than both the iPhone 11 and Galaxy S10.

The notch on the front is gone, replaced by a thicker bezel at the top of the screen. We prefer the clean line here though it does leave what is, in this age of invisible edges, a relatively large piece of seemingly dead space above the screen.

The Pixel 4 XL saves the more eye-catching elements of the camera for the rear of the device, a square at the top back left holding a 12.2 MP dual-pixel rear camera and, for the first time on a Pixel device, a 16MP telephoto camera.

While concerning ourselves with the back of the phone, we note the removal of the fingerprint sensor. Google has gone all-in on Face ID on the Pixel 4 phones. As with the latest iPhones, it seems the move to Face ID will be somewhat thrust upon us, and app manufacturers, whether we or they like it or not.

The overall design of the Pixel 4 XL is smart, minimal, if not a little uninspiring. Our feeling is it lacks the wow factor and flagship feel of rivals, even though some might like the sleek design. The “soft-touch glass back” is the same as the 3 XL and while it’s not the fingerprint magnet of some rivals, it’s certainly something of a slippery customer. A case will of course negate that last line.

First, unlocking the phone. Out with the fingerprint, in with the Face ID. We see a few issues with this attempt to move users on to Face ID. Firstly, not everyone is on board with their phone logging their face. Secondly, and perhaps more pertinently, some apps that have supported fingerprint sensors as a security lock don’t yet support face unlock. Thus, your shiny new phone could prove clunkier when it comes to logging into your internet banking, for example. Google must hope app-makers will follow their lead.

We are happy to report that Face ID does at least work well. It’s fast and reliable. It also works if your eyes are closed, by design, which might have the more security conscious consumer worried. That said, so did fingerprint scanning at the time. For what it's worth, Google says face unlock is processed entirely on your device, the image data never leaving your phone and never saved or shared.

One way the Pixel 4 XL Face ID is so effective is due to Soli, Google’s new motion-sensing radar, known here as ambient sensor. The Soli radar chip and an ambient light/proximity sensor is found within that bar at the top of the phone, meaning the Pixel 4 phones wake up as a hand or face approaches. This makes Face ID extra-fast but also means alarms silence as you reach for your phone. It does also allow you to skip tracks and silence calls with a gesture, though.

It feels like a genuinely useful step forward, even if the number of controls is limited for now (and skipping tracks proves a little hit and miss). The glow of the light at the top of the screen takes a little getting used to, looming into life whenever your hand goes near the phone, but we think the technology is worth it.

Ambient Sensor may well take its toll on the battery but thanks to a boost from 3430 to 3700 mAh, the Pixel 4 XL should be able to take it. Overall battery life certainly feels improved over the older model, and should give all but the most powerful of power users that “all day battery” that Google claims.

As well as the radar glow at the top of the screen, Google Assistant is more prominent at the bottom of the screen. The corners tease you to swipe up and unlock more features and the assistant is becoming deeper integrated into more apps. We still don’t feel compelled to use it in everyday life, though there’s no denying Google’s voice search is powerful and accurate. If voice search is your thing, you’ll be happy to see Google is focusing on its improvement.

Much of the day-to-day performance bumps come in part thanks to the new Qualcomm Snapdragon 855 with Octa-Core processor, together making for a tidy processing upgrade (although an even newer chip is already available). There’s also 6GB RAM, up from 4GB on the Pixel 3 X and Pixel 3a XL. In use, the new Pixel is every bit as fluid and fast as you’d expect from a flagship phone, with transitions feeling snappier here than on the last model.

Elsewhere, Google’s new Recorder app has been attracting headlines, capable of offering real-time transcoding of voice recordings. For now, it’s at once impressive and underwhelming. Yes, you can watch as your conversation appears before your eyes in a ready-to-send document but you’ll also see that the conversation is getting around 1 in 5 words wrong. No doubt it will improve. (And perhaps we could learn to enunciate more clearly.)

On paper the Pixel 4 XL screen is essentially the same as its predecessor with only the tiniest of changes to the dimensions. It’s still a full-screen 6.3-inch, 3040 x 1440 resolution, Quad HD+ flexible OLED. The screen has a slightly higher pixel density of 537ppi (pixels per inch) due to minute changes in the dimensions, which is a higher ppi than the iPhone 11 Pro but lower than the Galaxy S10.

What is new is the 90Hz screen refresh rate, up from 60Hz on the 3 XL. It’s not the first 90Hz phone - there’s the OnePlus 7 Pro for example - but it’s the first time on a Pixel phone. It can also adjust refresh rate automatically according to the content. The screen supports HDR video, too.

Crucially, compared to its predecessor and the competition, the video performance is very good. Black levels are impressive, contrast is excellent. Watching Dark on Netflix the Pixel 4 XL delivers a slick and dynamic picture that draws our eye when put side-by-side with competitors. There’s real depth to gloomy German forest scenes but colours are still given punch and warmth.

There are all manner of colour adjustments at your disposal of course but the basic colour palette is warmer than the also excellent OnePlus 7 Pro. Switching the Pixel from Natural to Adaptive or Boosted will give a bolder delivery but we prefer Natural for the most watchable, realistic image.

Previous Pixel phones have been let down in our minds by lacklustre sound. As is the case across most consumer electronics categories, the minimum level of performance from phones has happily raised in recent years, so while Pixel audio quality certainly hasn't been bad, the Pixel 3 XL was rather left behind by the competition. Unfortunately, it’s much the same with the Pixel 4 XL.

Listening to hi-res streams on Tidal there’s reasonable detail and no hint of harshness but we want more drive and dynamism. We find songs passing us by compared to the class-leading iPhone 11, which offers more insight and better organisation for a more engaging listen.

Those gesture controls work here, too, so you can swipe forward or back across the phone to skip through your tunes. This even works on the lock screen, which is handy.

Of course, the 3.5mm headphone jack is already a distant memory on Google’s phones, so you have a USB-C connection for music and charging. You no longer get a 3.5mm to USB-C adapter in the box, nor a pair of earbuds, so you’ll need your own USB-C headphones, adapter or wireless earphones to get listening.

Once again, the Pixel 4 XL delivers a class-leading camera performance. If you want your smartphone to afford you professional quality pictures with the editing options to match, then you have to consider this phone.

Google has finally added a second lens, with a 12.2 megapixel f/1.7 main lens, 16 megapixel f/2.4 telephoto, plus 8 megapixel selfie cameras. Only an ultra wide-angle lens is missing for the box-tickers. Video recording is set to 4K 30fps on the main camera, not 60fps as on many rivals, and only HD via the front-facing camera. Google’s Pixel Neural Core is in charge of the software.

The good news is if you just want to point and shoot, you will a) get excellent images, and b) can edit them easily without getting into the more advanced camera settings. There are now simple brightness, contrast and zoom functions on the main camera screen.

Pictures are punchy thanks to bright colours, great contrast and razor sharp insight. Black detail is impressive and Google’s Night Sight still works wonders should you want to brighten-up completely a dark shot. The entire premise seems somewhat unnatural in our opinion but there’s no denying the technology works if you really want a picture of something when it’s simply too dark.

We’ve said it before, and we’ll say it again - you don’t half get a staggering amount of technology in today’s smartphones. And the Pixel 4 XL is a fine example. While this isn’t a huge upgrade on the 3 XL, there are good enough upgrades to overall usability, performance, the video and the camera, plus some neat new features that are exclusive to Android 10 on this phone.

With our sound and vision hats on, it’s just a shame the audio quality doesn’t match the performance elsewhere to make the Pixel 4 XL a true five-star phone. That said, for Android purists and photography fans, this may well still be the phone to beat.