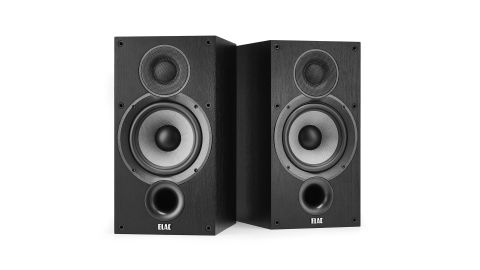 The Elac Debut B6.2s are mature and understated, diligently presenting our music without comment, just as it has been told

It’s fair to say that this review, more than many others, has been eagerly anticipated. Having given these speakers’ smaller siblings a What Hi-Fi? Award at the end of 2019, we’ve been itching to spend some time with the Elac Debut 2.0 B6.2 speakers.

Most speaker series have a star performer, which isn’t always entirely representative of the rest of the family, but given the fortes of those award-winning Debut 2.0s, there was good reason to believe Elac had more treats for us up its sleeve. And so it transpires.

While their looks are understated, and even sonically they refuse to beg for your affection, the Elac B6.2s are mature, transparent performers that confidently outline just what the rest of your system is doing. It is hi-fi mentality at a price that only just nudges into the midrange.

The Elac Debut 2.0 B6.2 speakers use a larger, 16.5cm version of the same revised mid/bass unit found on the Award-winning B5.2s, using a new blend of aramid fibres for the cone, combined with a different shape to improve stiffness and damping.

The dust cap is now convex rather than concave, benefitting the top end of the driver’s operating range and helping integration with the tweeter.

Protected by a shapely grille, that tweeter is much changed from the original Debut versions. It is now a wide surround design with improved dispersion and a top-end response that extends to 35kHz, compared with the 20kHz limit Elac set before.

The reflex port is the easiest difference to spot, having navigated its way to the front of the cabinet to aid placement of the speakers against a back wall. Although we’re edging away from the budget end of the market here, we will always celebrate the kind of versatility that makes set-up as easy as possible.

The work done to improve rigidity and bracing of the Debut 2.0s’ MDF cabinets is less obvious, but has been done to reduce unwanted resonance and distortion. Lifting them from the box, though, there is definitely a solidity that suggests you’re not being short-changed on build.

Everything about the B6.2s is really rather honest. Elac has done little to ornament its star speakers, limiting the new Debuts to the one finish, Black Ash vinyl, and branding them with only a small logo below the front-firing port.

They’re fairly basic and unassuming, but that is representative of how they operate, presenting your music faithfully and uncoloured.

The bigger cabinets, aided by that sizeable reflex port, predictably offer a good deal extra weight to the bass response, compared with the Award-winning B5.2s, but these Elacs still refuse to overstretch. Tracks that reach to the depths of the frequency range will highlight the B6.2s’ limits in this regard, but these speakers don’t seem embarrassed to have limits.

This is an open and well-balanced frequency range, free to reach high into the treble and deliver ample bass without forcing any more than is comfortable. If you want more low-end, you’ll need a bigger cabinet; these Elacs aren’t going to pretend they’re bigger than they actually are, at the expense of transparency.

It’s a similar story with pretty much every aspect of their presentation. This is a punchy and rhythmic performance, for example, but with nothing thrown forward in the mix to suggest false enthusiasm. The Debut 2.0 B6.2s will track everything your amplifier throws at them with quick and agile feet, and won’t attempt to play safe by tempering any edges, but equally they aren’t going to be the source of any kind of boost.

This approach is mirrored in terms of dynamic expression, with the Elacs simply echoing the information they’re being fed. You can think of them as the paintbrush, useless without the artist’s hand, but submitting wholly to their character. It’s the kind of maturity and transparency we don’t often see at this end of the market.

Moreover, the B6.2s are unfussy when it comes to volume. All components have a sweet spot, with trade-offs in expression the louder you go, but Elac has managed to avoid the life being sapped from its speakers when played at low volume. It’s just another sign you’re getting a more grown-up pair of speakers than the price tag would suggest.

Of course, these affectations can be useful for affordable speakers, particularly in terms of system matching. Having any component that is willing to take the reins and force its own character while rounding off any potentially offending edges means that you can take less care with how you pair it.

That isn’t the case with the Elac Debut 2.0 B6.2s. Just as they’ll turn out a polished representation of all the good a talented source and amplifier is doing, they will be unforgiving in showing the flaws of any kit that isn’t up to scratch.

So if you’re looking for a speaker upgrade for a budget micro system, these probably aren’t it. On the other hand, these Elacs will only limit anything too high up the food chain. Transparency is all you might ask of a piece of hi-fi equipment, but it comes at the cost of having to be careful just what it is showing up.

But an amplifier such as the Marantz PM6006 UK Edition would make a marvellous partner, and you could even upgrade to an amp such as the Cambridge Audio CXA61 without the immediate need for a new pair of speakers. The Elacs give you the flexibility to choose the character you like in the rest of the chain, while being careful not to throw things together unthinkingly.

We’re big fans of this new Debut series. The B6.2 speakers take what we loved about their Award-winning siblings and build on it with an even fuller-bodied and more mature presentation.

If you want a faithful representation of what the rest of your system can do, the Elac Debut 2.0 B6.2 speakers will deliver just that.