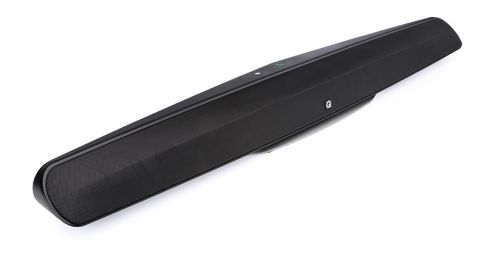 There’s plenty to like about this new soundbar, but its older sibling overshadows it for similar money

By all rights, the new Q Acoustics M3 soundbar should have a five-star review in the bag.

After all, it builds upon the Q Acoustics Media 4, which has been our favourite budget soundbar (and Award-winner) since 2014.

An updated and sleeker design, extra features such as an HDMI input, and a clearer, more detailed sound should all point to the M3 easily beating its older sibling.

And yet there's only £30 difference between them, which means that things haven’t quite gone the way Q Acoustics would have wanted for this £300 soundbar.

That said, the new Q Acoustics M3 improves on the Media 4 in many ways, the most obvious of which is the design. The M3 looks sleek and modern.

It’s an improvement upon the Media 4’s rather awkward trapezoid shape, which has been slimmed down to something more sensible and bar-like in the new version.

Build quality is suitably sturdy, and the svelte shape is all the more impressive considering the M3 houses the same large elliptical subwoofer driver from the Media 4 in the back of the unit. This negates the need for an external sub and keeps things tidy.

Two BMR (Balanced Mode Radiator) drivers handle the left and right channels, and though a touch smaller than those in the Media 4 (5.8cm instead of 6.5cm), they continue to provide a wide dispersion of sound.

Anyone disappointed in the lack of HDMI inputs in the Media 4 will be pleased to know that the M3 has one included on the back of the unit.

It supports Audio Return Channel (ARC) as well, so you’ll be able to feed sound from the TV directly into it and sync up control so you need use only one remote.

Other connections include an optical input (which can support up to 24-bit/96kHz music files), a pair of analogue RCA inputs and a 3.5mm socket to plug in other sources.

For those wanting to stream songs wirelessly from their many smart devices, aptX Bluetooth makes the process fast and painless.

The LED around the bar’s power button lights up with different colours depending on the input used: purple for HDMI, white for optical, blue for aptX Bluetooth, and green for line in. It's a nice touch. The top control buttons have been redesigned as well, but they remain responsive.

The M3 comes with a tiny credit card-style remote. It’s virtually unchanged from the old remote, but that’s a good thing: the soundbar is blissfully simple to use and the remote, while basic, is responsive with all controls.

One new addition is the ‘MoviEQ’ sound mode, which is claimed to enhance movie soundtracks (translation: more ‘oomph’ to the bass).

Considering the M3 already has an abundance of bass that doesn’t need exaggerating, we’d steer clear of this mode - the normal ‘stereo’ mode works just fine.

We start with the John Wick Blu-ray and instantly find ourselves drawn into the big, rich sound that goes well beyond the soundbar’s modest proportions.

The M3’s full-bodied character means there’s plenty of meat to sink your teeth into when bullets fly and punches are thrown.

Dialogue is clear and direct, too, with enough nuance coming through to discern the deadpan delivery from the hardened assassins.

At this price, the M3’s closest rival is from within Q Acoustics’ range of soundbars, namely the Media 4.

While the piercing edge of shattering glass, squealing tyres and pinging bullets sounds crisp and attacking through the M3, the Media 4 sounds even clearer and more detailed.

What lets the M3 down is a booming quality to the sound that spoils the otherwise decent balance. Clarity and organisation isn’t entirely compromised, there’s just a little tubbiness around the midrange that sounds a touch ungainly.

It’s present throughout, and sticks out like a sore thumb, regardless of the type of music you listen to. There’s no such sonic tubbiness on the Media 4.

The M3 also falters on rhythmic ability. The edges of notes don’t stop and start as precisely as they do on the Media 4, nor does it handle dynamic shifts with the subtlety needed to build up tension in songs like The Dead Weather’s 60 Feet Tall.

The Media 4 simply times better. It has a better sense of rhythm, and of how instruments should gel together.

It’s that effortlessly musical and subtle touch that ultimately makes the Media 4 a more engaging and immersive listen with movies and music alike.

The Media 4’s continued dominance means that the M3’s shortcomings are under intense scrutiny. If it weren’t for that booming bass, the new M3 would have fared better.

As the M3 isn’t a direct replacement for the Media 4, it’s a bit baffling that they are almost the same price. In a straight comparison, the Media 4 is still the soundbar we’d recommend and is well worth that extra £30.

The M3 has plenty going for it in terms of its smart design and clear, rich presentation. It’s definitely a step in the right direction in some respects - but it needs to offer a better overall performance to step out of the Media 4’s long (and distinguished) shadow.

See all our Q Acoustic reviews