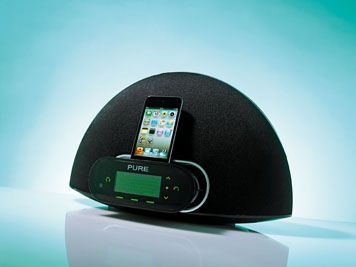 A fine idea, with solid sound and features – but it misses the build and interface

Pure seems to be incessantly busy. Not content with continuing to release its
bread-and-butter products – DAB/FM and, increasingly, internet radios in various shapes and sizes – the company has also released innovative products such as the Sensia, and software such as Flow Songs.

And here’s another slice of Pure innovation: the company’s first DAB/FM/Internet radio complete with iPod dock.

The Contour strikes a new Wembley-esque shape for a Pure radio. Touch controls are mounted on the top of the arc – power, mute and volume – while the iPod dock pops out at the bottom when pressed (just like a car cup holder).

There’s a screen on the dock itself, too, which gives access to the now familiar Pure interface, plus a handful of backlit touch controls.

Feature-packed, but iffy build
And this proves a questionable move: the dock tray feels far from sturdy before we even think of prodding it, and we feel justified in expecting something a little more rigid and snugly fitted.

Still, there’s no denying the functionality of the Contour. Pure is bullish about its new baby’s sound quality with more expensive iPod docks in its targets, which makes the fact that you also benefit from DAB, FM and internet radio, an S-video output and auxiliary input here, a real bonus.

Listening to a shuffle of songs on the office iPod Touch, the sound is clearly a step above the average dock.

There’s plenty of weight to Boards of Canada’s Aquarius, and you’d have to spend a few quid more to get a touch more agility.

Tonally it’s balanced, ensuring that treble sounds clear without brightness (Pure’s Clearsound technology is on board) even at louder volumes.

And it goes very loud. Against more expensive, dedicated docks, it wants for a little organisation and transparency, but consider the price and extra features and it’s right back in credit.

Easy to sort stations
The strength of Pure’s tuners has been a crucial in its success for some time, and the Contour is no different, delivering internet radio, DAB and FM with clarity and power.

So, what’s the catch? Build and usability. We’ve already mentioned the flimsy dock tray, and after extended use the issues mount – whether it’s not connecting every time an iPod’s docked, or simply the lack of responsiveness to the controls and interface.

The bundled remote control is essential – so we’d also like the screen to be a little bigger and easier to read to be able to control it from across the room.

Pure value for money
Make no mistake – the Contour offers a heck of a lot of product for £200, and
does most of its work in fine style – it deserves to make plenty of people happy… which makes it such a shame that our praise has to be qualified.

We simply can’t ignore the gripes that we’ve found, and we feel justified in expecting better.

See all our internet radio reviews