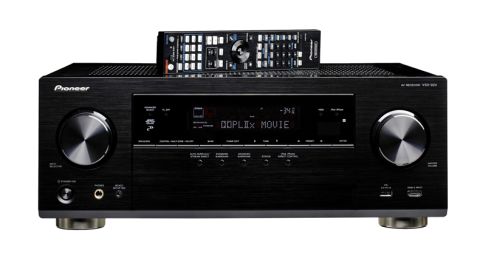 A solid effort from Pioneer, but the excellent competition rob it of a fifth star

If we placed Pioneer’s recent receivers at this price on a scale, they’d come out around fair-to-middling.

Good rather than great, they’ve just not been able to make that jump to the next level of the likes of Sony and Yamaha.

The VSX-924 is trying to change that. From the moment you first hear it, it puts precision and clarity at the top of the list.

Set-up is a cinch. The once lengthy Pioneer Advanced MCACC room calibration seems shorter – although it’s still a harsh few minutes on the ears.

Set-up is easy using Pioneer’s newbie-friendly AVNavigator built in to the receiver.

Meanwhile, the iControl AV5 control app has features such as a searchable music list and is backwards compatible to amps dating from 2012.

All the step-by-step instructions on wiring and calibration you will need are here, plus an interactive guide on what each of the remote buttons do.

There is an iPad app - should you prefer - for more in-depth and interactive information on the MCACC measurement data.

Talking of the remote, it’s still a rather button-heavy affair, but a redesign has improved its usability.

This was one of our niggles last year, and we’re happy to see the reduction in the double-function keys, which caused confusion in the past.

There’s plenty of ‘new’ packed into this receiver: 4K upscaling at 60Hz and full-colour resolution across all seven of the 924’s HDMI ins, a new DAC, DSD file playback over your home network, and built-in Bluetooth with aptX support.

Unfortunately, wireless connectivity remains an external add-on via an adapter, but it is at least included in the box now.

We start with a high-speed car chase from Fast & Furious 6.

As Dom and Brian race through the winding roads of the opening scene, it’s clear Pioneer is keen to add ‘big and dynamic’ to its attributes.

It sounds richer and weightier than last year’s model, with a larger soundfield. Precision and detail are still this amp’s strong points, and sound effects are placed superbly around the room.

The roaring engines of the racers are delivered with aggression, and you can hear and feel every change of pace thanks to a good handling of dynamics.

Speed is highlighted by a solid punch from the bass, with zing in the treble giving a wonderfully layered sound.

For all that is good here though, there are competitors that can do all this, and better.

The Yamaha RX-V677 offers more scale and grunt, while the Sony STR-DN1050 is capable of a superior level of subtlety and better dynamics.

We find this character in musical playback too, which times well but sounds much smaller and less engaging than via the Sony.

CD playback or high-res networked tracks offer the most musical results, with less of the hardness that appears in AirPlay or Bluetooth tracks.

Spotify Connect is on board, so you’ll be able to access and stream your playlists which, once connected, can be controlled via the receiver remote independently of your phone or tablet.

As user-friendly as ever, it’s stacked with stylised settings to tweak and a visual list of inputs and sources.

The Pioneer is a conundrum.

Listening to it in isolation it’s a tempting proposition, but when considered within this competitive market, it’s overshadowed by others.

The VSX-924 is another good effort from the Pioneer stable, but falls just short of greatness.