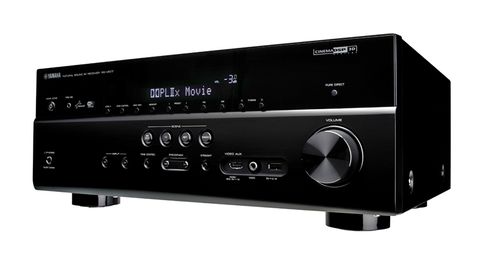 If weight, scale and pure blockbuster excitement are high on your list of receiver must-haves, the Yamaha RX-V677 is one to put on your shortlist.

But this 7.2ch V677 is far from a one-trick pony. Sure, you’ll get an impressive bass performance that will make action movies shine, but you’ll also get an expressive receiver that will make the most of any content you throw at it.

Set-up on the Yamaha is quick and reasonably accurate. Ours needed some minor distance adjustments once the auto-calibration had done its thing, but nothing drastic.

It’s impressive when it comes to speed and simplicity, and online menus are clear and easily navigated, too. What’s not so simple is Yamaha’s now-infamous remote: it really is still far too complicated for its own good.

Wi-fi is an integrated feature in the V677 this year, though there’s still no Bluetooth (which you’ll find in most of Yamaha’s competitors).

If you decide this is the amp for you, you’ll have to make do with AirPlay, DLNA and Wireless Direct. Spotify Connect is on board here too, and works well, alongside HTC Connect for streaming from HTC smartphones.

We choose Fast & Furious 6 to put the Yamaha through its paces, and we certainly aren’t short of scenes to give that powerful bass centre stage.

It’s not overbearing, but that low end is a large part of the Yamaha’s character and appeal. It’s a big, powerful and immediately exciting listen that packs gunshots with impact and solidity, and car engines with grit and impatience.

Sound effects are passed from speaker to speaker effortlessly, and the level of detail on show is superb.

The midrange is expressive and spacious, giving great texture and direction to dialogue, while the treble packs real zing into every crash of metal to push excitement levels up another notch.

However, the V677’s bass can be a little reluctant to keep up with the rest of the mix, and sounds a little lazy in comparison.

There’s never a drop in enthusiasm or excitement though – the Yamaha is always keen to please and always engaging.

We can’t say that its treble, midrange and bass are the most balanced when it comes to character, but throw them all together and the results work – it’s the eagerness to entertain that is endlessly enjoyable.

This character passes through to its stereo performance, which stands up as a decent option for those who aren’t able or willing to buy a separate stereo amp.

Play The Verve’s Bitter Sweet Symphony and the unmistakable violin melody powers along with enjoyable drive.

We’d suggest steering clear of the Bass Enhancer setting, particularly when playing music. It pushes the already-weighty bass into being overpowering and heavy-handed.

It’ll add some extra rumble to explosions, but for the most balanced performance we’d keep it off.

Yamaha’s AV Controller app provides clear and concise options for tweaking levels, selecting sound modes and changing inputs. It’s responsive and functional, and saves you having to use the overly complicated remote, too.

The Yamaha RX-V677 is a fun receiver with a keenness to please that’s endearing. Its bold character isn’t always the subtlest, but its detail retrieval is top notch.

At £560 it has slightly more refined receivers nipping at its heels, but if it’s a showstopper you’re after, stop here.