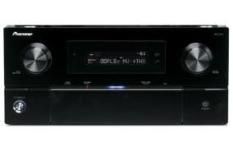 A solid performer, but not quite the accomplished all-rounder we had hoped for

We've been repeatedly asked on our Forums about Pioneer's SC-LX71 multichannel receiver, so here, brought to you exclusively on whathifi.com, is our first review.

The SC-LX71 comes from a stable that also includes the Award-winning SC-LX81, which sells for £1400. It shares the same looks and build quality of its bigger brother, and it too was tuned at London's famous Air Studios.

We tested it in conjunction with Pioneer's own BDP-51FD Blu-ray player, yours for £350. Put the two items together and the receiver wows you with its agile, pacey delivery.

High-speed surround effects
As cars jostle for position during Death Race, gunfire rains down on your listening position with decent accuracy and to great dynamic effect. Surround effects flit between speakers with speed, bringing you right to the edge of your seat.

There's certainly no problem if you want this receiver to go loud, either. Crank it up and it will retain its composure, whatever movie you decide to play.

But it's not just a powerhouse. With CD playback, the SC-LX71's spritely, agile nature makes for an entertaining listen. Tunes bound along with great frivolity. Sure, it's not as good as a dedicated stereo amp (few multichannel models are), but it makes a decent stab at music making.

A little lean, a little loose
But you'll have seen by now that we've awarded the LX-71 four stars, not five. Why so? Well, the Pioneer receiver just doesn't sound like the finished article. There's a touch of thinness in the higher echelons of the treble.

That's something we certainly didn't notice on the pricier SC-LX81. Bass notes sound a tad looser too, and the more expensive model exhibits greater grip and definition. What's more, the LX-71 lacks the '81's dynamics and punch.

This is by no means a mediocre receiver – the surround steering is good, and it creates a well-focussed soundstage – but sonically, it just isn't quite the finished article.