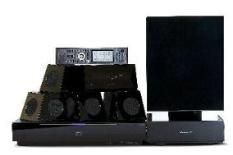 We'd hope it would deliver more, but at this price (and given how the market has moved on) it's not rounded enough for us

The appeal of home cinema in a box systems is easy to define.

Why buy lots of different kit that may or may not work well together, and that will almost certainly clutter up every corner of your living room, when you could pick up a one-make system to do the same thing? All the more so when it's as compact and stylish as Pioneer's new LX01BD?

The answer is performance. We've been waiting a long while now for a Blu-ray all-in-one that impresses all-round, and on this evidence, we're going to be waiting a while longer.

This Pioneer is certainly a very interesting design, though. It follows on from the LX01 system we enjoyed testing a year ago: there's no hard-disk or DVD recorder (as found in the old model), but instead you get a Blu-ray disc player built-in.

Dodecahedron speaker design
The rest is as before, so you'll find a separate, compact display unit, a large subwoofer with built-in amplification and inputs, and four satellites.

Those four dodecahedrons are designed to generate sound in all directions, filling in the gaps to create a realistic 360-degree soundstage.

The thing is, although the system does create quite an expansive sound, everything's quite recessed in the midrange, so voices in particular lack focus.

What's more, the combination of a deep subwoofer and lightweight speakers doesn't quite gel: there's no shortage of bass weight and little sibilance at higher frequencies, but voices lack projection and clarity.

We don't remember the original LX01 being so compromised.

Strong spec, average stereo
Of course, these qualities don't lend themselves well to CD reproduction either. Play Adele's Daydreamer and the strong vocal delivery appears vague, while guitar-led tracks like General Fiasco's Rebel Get By lack any real sense of drive or immediacy.

In other ways, the LX01BD is extremely impressive. There's the obvious style and convenience of its packaging, plus a truly brilliant remote and auto-calibration feature, two HDMI inputs for extra sources, and full support for high-def audio.

What's more, the separate, compact display has an IR receiver built-in. This means you can hide away the subwoofer (to a degree) and Blu-ray elements of the system if you wish.

Stunning Blu-ray – at a price
Picture quality's superb, too. Play a Blu-ray like Blood Diamond and the Pioneer combines stunning detail levels with sharp edges and a perfectly judged colour palette. Motion is silky-smooth, and punchy whites contrast with deep blacks.

That means the picture is pretty-much identical to that of Pioneer's BDP-LX71. And you could partner that with Yamaha's DSP-AX763 receiver and KEF's KHT3005SE speaker package for the same money.

True, that means having a receiver – but the sub is much smaller, and the sound performance is so much better