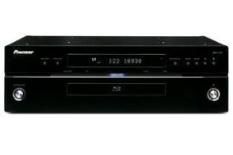 If you’re serious about Blu-ray and want class-leading picture quality, then the Pioneer has no equal

While the all-aluminium casing and glossy fascia do their best to charm you into submission, this 14kg beast remains a pretty imposing figure.

The player's status is aided by extremely impressive design cues and a thorough feature-set. The 'LX91 is the first Pioneer Blu-ray player to be tuned by London's famous Air Studios.

It's also Pioneer's first Profile 2.0 and BD-Live compatible machine and comes complete with an Ethernet socket for internet connectivity.

Onboard decoding
There is onboard decoding of high-definition audio formats to PCM via HDMI, and Pioneer has assured us that there will be an imminent software update allowing you to decode DTS-HD Master Audio over the player's multichannel analogue output.

The 'LX91 is fitted with not one but two HDMI outputs for connecting to two displays. Alternatively, you can take audio signals from one output straight to an amp and video signals from the other output direct to a screen for the purest signal path.

Internally there are separate audio and video boards, a dedicated analogue audio power supply and eight separate high-grade audio DACs, one per channel.

Easy to navigate
Operation is relatively painless –although the Pioneer does take a little longer to load Blu-ray discs than the Sony. The player's own on-screen menus are clear, concise and easy to navigate.

Once you have a disc loaded, the Pioneer produces a sublime picture. Blu-ray images are pristine and unblemished. They're significantly clearer and cleaner than those produced by the Marantz BD8002 and Denon DVD-3800BD machines. The Blu-ray version of Australia looks sensational.

The punchy, vibrant scenery contrasts superbly against the darkly lit bar room where Drover is found brawling. The Pioneer is the pick of the crop with DVD playback too, displaying a similarly lucid and cohesive image.

The standard-definition version of Quantum of Solace can never match its Blu-ray counterpart, but the Pioneer makes a great effort upscaling to 1080p and keeping on-screen noise to a minimum.

Sonically, the 'LX91 opens up with an expressive, forthcoming sound. When Bond's plane comes under fire, the Pioneer ramps up the excitement factor.

The dramatic score and machine gun fire hit you with force – though they don't gel together quite as seamlessly as when heard through the Sony BDP-S5000ES.

There's a nice sense of fluidity and rhythm to CD and while organisation and focus might not be its strong points, the entertainment factor is still high.

The 'LX 91 is expensive, but the performance, especially with picture, fully justifies that price tag.