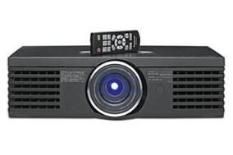 Panasonic has made it its business to knock out great home cinema projectors at this price.

Eagle-eyed readers will know that the PT-AE4000E has proved to be just such a chip off the old block, with a best-in-class for 2010 Award rubber-stamping our approval for this LCD projector.

Updated with tech tweaks
Not content to rest on its laurels, Panasonic been a-tweaking, introducing a new Red Rich lamp, (which aims to boost brightness and improve colour), a claimed contrast ratio of 100,000:1, and an Intelligent Lens Memory that lets you store six settings.

There's no cutting-edge tech for projectors around this price to be keeping pace with – we've only seen one 3D projector so far and it was a fair chunk more expensive than this – so the three HDMI inputs and 1920 x 1080 Full HD resolution ensure this projector remains adequately specified.

With a £2k projector we expect nothing less than a picture that's easy to set-up thanks to flexible zoom and position controls, and that's the case here. A little tweaking to the picture and we're happy with what's in front of us.

Punchy, bright and vivid colours
Toy Story 3 shows that punchy, bright, vivid colours remain the Panasonic's comfort zone, working alongside an impressive degree of detail that makes for rounded, realistic characters – even if they are animated (superbly).

Switch to some human skin tones courtesy of the storming Blu-ray of Inception, and the 4000E shows itself capable of a more natural touch, while still bringing a lively, punchy picture to the table and handling motion well enough.

But with some fresh competition, we do now – brace yourselves – find the odd flaw. Tricky-to-render patterns and textures (such as a the linen jackets worn in the Inception scene set in Mombasa) turn-up
a little noise and there's also not quite the dynamic contrast offered elsewhere.

The 4000E is still great, but thanks to some serious price-slashing elsewhere, the bar in this category has been raised