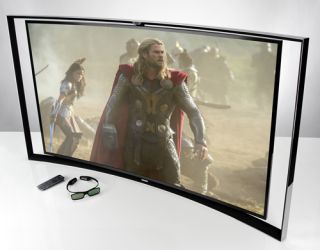 Curved OLED TVs came as something of a curveball when they emerged at CES 2013, with even people close to both LG and Samsung telling us (off the record) that the curved TVs had taken them by surprise.

But it seems they were no novelty. Eleven months later, and with CES 2014 looming, curved OLED TV is a reality, not just in press releases but in shops in the UK and indeed in our test rooms. Cheap they ain’t, but they’re real.

It’s a subtle curve, more subtle in reality than it may seem in pictures, but there nonetheless. So why are the first OLED TVs curved?

Naturally, if you ask LG or Samsung, the two purveyors of curved OLED TVs – it’s rare that one lets the other go it alone on a new technology – then it’s all about the performance benefits that the technology brings to consumers: improved viewing angles and a greater sense of immersion.

As our review of Samsung's curved OLED highlighted, we're divided on that for now: "The benefit of a curved screen is subjective, and, frankly, we’re still arguing about it. Some of us find it immersive, aided by a frame that draws attention to the centre of the picture. Others find it a distracting gimmick, especially when viewing from the sides, where the picture doesn’t taper off uniformly like a regular screen."

But one thing our Samsung KE55S9C review told us is that the benefit of a curved screen is definitely better suited to lone viewers: "Sitting directly in front of this Samsung curved OLED TV, though, we could all agree that it’s a comfortable viewing experience. From here, the S9C’s picture is stunning."

If you live alone or can somehow instruct your household that you must enjoy your movies and TV in strict solitude, then great, but for the majority of people and majority of viewing hours, that’s unrealistic.

So where does solitary viewing make more sense, more of the time – in fact, nearly all of the time? Smartphones and tablets, where one person at a time will watch the vast majority of video content.

That’s why the curved OLED screens of the recently-announced LG G Flex and Samsung Galaxy Round phones make much more sense. Or, as more cynical eyes might say, makes any sense at all.

Not only will a curved handset theoretically fit the hand better than it will fit your living room wall, the viewing angle benefits of the curved screen don’t have to work for more than one viewer at a time. No wonder then, that Apple is reportedly said to be investigating curved iPhones.

A 6in curved OLED screen, as on the G Flex, may not be big enough to bring home the benefits, but how about a 10in screen?

If curved TVs don’t float your boat and curved smartphones seem hard to get your head, if not your hand, around, then how about a curved OLED tablet?

When OLED first reared its head, there was much talk of screens you could roll up like paper and sling in your bag.

But perhaps it’s a more subtle curve that will prove most beneficial and perhaps the large-screen tablet might be the ideal size for a curved display. Over to you, Apple, LG and Samsung.