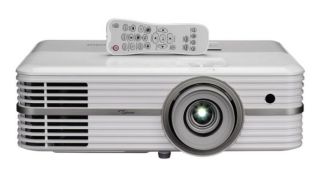 Considering the ever-evolving state of consumer electronics, it’s not surprising that every What Hi-Fi? Awards brings with it a ‘first’, whether that be the first time we introduce a sub-category or the first time we officially decorate a new technology.

Why no Full HD beamer, you ask? Well, for two reasons actually.

Firstly, while we’ve liked affordable Full HD projectors (such as the Epson EH-TW650) in the last twelve months we don’t feel any are particularly worthy of a prestigious Award.

4K all the way

And then there’s the fact that 4K projectors are – hoorah! – no longer exclusive to high price tags. Optoma’s UHD40 (pictured above), for example, offers for a spectacular picture – one that’s vivid yet realistic and with lashings of detail – for a very reasonable £1200. That's why it takes a 2018 Best Buy (and often a place in our AV testing room as our go-to projector).

It’s no match for its sibling, Optoma's £3000 UHD65, however, which won Product of the Year in 2017, and has half a chance of winning a second as it picks up the only other Best Buy award in the projector category this year.

With a performance that delivers wonderfully bright, dynamic and insightful renditions of 4K, and proves equally adept at upscaling SD and HD content, the UHD65 remains one of the very best beamers on the market.

For the first time in years, there’s no 4K Sony in sight to take an Award at even higher price points. That’s no slight on the brand, mind. One of its latest beamers we’ve seen, the VPL-VW260ES, was very much up to Sony’s typically high standard, but alas it’s being discontinued soon in light of Sony’s forthcoming fare announced at IFA.

Maybe next year it will return, but for now the praise is deservedly all in Optoma’s favour. And, regardless of which model it swings to, so is our 2018 Product of the Year projector award.