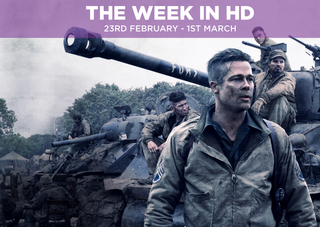 Grim but effective, Ayer's film features some finely shot tank sequences - but the tone can be hard to get to grips with.

Buy Fury on Blu-ray at Amazon

Spin-off of the much-liked horror film The Conjuring, Annabelle didn't fare so well on its release.

When a couple comes into the possession of the vintage doll, their life takes a turn for the worse after a satanic cult invades their home.

Could the doll have some connection with the violent events? Of course it does.

Buy Annabelle on Blu-ray at Amazon

The Distance. When a huge storm stops the group in their tracks, they come across another person who seems friendly and wants Rick and his gang to join their community.

If you didn't stay up on Sunday night to watch the Oscars, there's a chance to see the highlights on Monday night.

Neil Patrick Harris is the host of the 87th Academy Awards, which sees Birdman go up against Boyhood in the main categories. But did the right film prosper?

Manchester City were knocked out by Barcelona at the same stage last year, so the question has to be whether history will repeat itself this time around?

With City regaining form after a dip and Barcelona suffering a weekend defeat that left them several points behind their rivals Real Madrid, there's every chance City could cause Barcelona problems.

This could be seen as the hipsters' choice if City and Barcelona doesn't interest.

Dortmund have recovered from a disastrous first half of the season and are now 11th in the Bundesliga, while Juventus are showing fine form in Serie A. This could be the Old Lady's toughest test of the season so far.

Crazy for You. Barry gets some warm, fuzzy feelings for a sports reporter but that's interrupted when a meta-human with teleportation powers causes havoc in the city. Barry can run fast but can he keep up with a teleporter?

The Second Best Exotic Marigold Hotel hits cinemas this Friday and here's a chance to catch up with the first film.

Several elderly Britons respond to an travel ad and travel to Jaipur, India where they come across an exotic hotel and its owner, Sonny Kapoor (Dev Patel). Less luxurious than the ad details, the Brits are won over by Kapoor's charm and find that India begins to affect them in unexpected ways.

Useless Fact of the Day: at the train station near where we work, there's still an ad for the first film on the platform.

Buy The Best Exotic Marigold Hotel on Blu-ray at Amazon

After the Grammys, BAFTAs and Oscars comes the BRIT Awards, celebrating the best of British and international music. Ant and Dec host the show, with performances coming courtesy of Ed Sheeran, Taylor Swift and Madonna set to rock the stage.

Snowden has proved to be a divisive character but this documentary, which follows him as he was releasing documents to news agencies around the world, is an illuminating look at a whistleblower in the midst of changing how we perceive the world around us, with the ramifications still being felt as new information comes to light.

This week, Claudia Winkleman and Danny Leigh cast their critical eye on The Second Best Marigold Hotel, horror film It Follows and Focus, a con film starring Will Smith and Margot Robbie.

Everton battered Young Boys last week (yes, that sounded odd to us, too) with a four-goal mauling. The return leg should be an easy match but Everton's inconsistent form means we're never sure which team will turn up.

Uprising. We're not wholly convinced by some of the major changes in Arrow, but we continue to watch it. Uprising sees Team Arrow contemplate an unlikely alliance to take down Brick (Vinnie Jones), a man who has asserted himself as ruler of the Glades.

We know Vinnie Jones is hard, but surely even he can't take on Team Arrow and Friends?

The killer is revealed! The community is shocked when the identity of the murderer is made public, but the investigation doesn't stop there as Morton turns his attention to a death of a scientist months earlier. Was he killed, too?

Literature. This week, we dip into the world of literature as Lloyd Langford, Victoria Coren Mitchell, Jack Whitehall and Alan Davies - led by the always amiable Stephen Fry - discover what this L lettered word has to offer.

Steve Carell's big breakthrough film sees him star as a 40-year old virgin who has trouble finding the right girl. It's absolutely hilarious, full of terrific sequences and we'd say it stands up as Judd Apatow's best film. Catherine Keener is terrific in it, too.

Wales take on France at the Stade de France and we're expecting plenty of fireworks from these teams as the Six Nations progresses into the third round of matches.

The film that revitalised the ailing Bat franchise and thrusted director Christopher Nolan from small, independent films to big, blockbuster efforts (although that's not to forget Insomnia).

Christian Bale plays billionaire Bruce Wayne in this origin story that's semi-realistic in its take on the comic-book character. It's a cracking update that treated a comic-book with the seriousness it warranted. Cillian Murphy as Scarecrow is also one of the scarier villains we've seen.

Reginald D. Hunter's trip through the American south continues as he takes in the Soul Riches of Alabama, before returning to Georgia - the state he grew up in.

England take on Ireland in Dublin and they'll want to put a stop to the slow starts that have dogged them in previous matches. Ireland will be coming out all guns blazing and it'll be no mean feat to keep them at bay.

Richard Hammond gets up to some antics in one of the remotest parts of Canada by testing a watch with a built-in emergency beacon. Gillian Anderson is the star in the Reasonably Price Car.

The final episode of J.K. Rowling adaptation for the BBC sees tensions rise in the community of Pagford with the parish council election at hand. Who will win the election and what will be revealed as the dust settles?