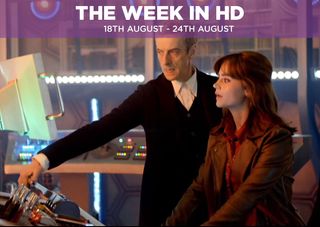 "Captain America was dull in the 1940s - an all-round do-gooder, an unabashed symbol of wartime propaganda. But put him on ice until the 21st and he becomes a badass outcast."

We loved Captain America: The Winter Soldier when we saw it in the cinema, with its political thriller vibe and how it tackled the SHIELD organisation and its deep-rooted evils head-on. Cap's friendship with Black Widow and the Falcon is another highlight, both striking a rapport without feeling glib or romanticised.

Steve Rogers himself is more than just a Nice Guy - he's not content to blindly follow orders anymore, and his humour is considerably drier, and funnier, too.

We can't wait to own the Blu-ray, and for those wondering why we think it's one of the most refreshingly competent action films in a long while, read our full review.

Bringing all its trademark gore and black humour for a second series, this conspiracy thriller continues to shock and delight in equal measure. The Utopia Experiments gang is still being hunted down by shady organisation The Network, as they attempt to decipher the prophetic tellings in a graphic novel manuscript.

Sharp, stylish and darkly comic, the second series returns with its central ethical debate unresolved: what should humans do when overpopulation leads to global bloodshed?

Both series are out on DVD today - perfect for catching up with the show from the start. We can only hope a Blu-ray version is also in the works.

Marc Marquez has a 10-race winning streak as he goes into the 11th round at Brno, despite Jorge Lorenzo and Valentino Rossi's best efforts. Can anyone stop the dominant young Spaniard from jumping on the podium again?

Tim Robbins and Morgan Freeman strike up a friendship while serving life sentences in this incredible 1994 prison drama that's on every 'best movies ever' list created.

Brick Like Me. What better way to celebrate The Simpsons' quarter-century birthday than with a Lego-themed episode? In Brick Like Me, Homer finds himself stuck in an alternate reality where everything and everyone is made up of Lego bricks.

As he goes about his day in Lego-Springfield, he has visions of his normal cartoon self - leading him to choose whether he wants to go back to his real world or stay in the perfect Lego universe where everything is awesome.

First leg of the Champions League play-off between Turkish team Besiktas and Arsenal, as the Gunners look to secure a place in the group stages of Europe's premier football competition

May Be The Last Time. Sookie hopes for a miracle, Bill decides to be a martyr, while Eric and Pam get closer to Sarah Newlin - who, hilariously, is the cure for the infected vampires.

Bread. The dreaded bread week. It's Paul Hollywood's domain, and he looms over our 10 bakers as they make 12 signature rye breads rolls, bake technically-perfect ciabatta loaves, and create 'a filled centrepiece loaf' for the showstopper.

I'll be honest, I don't know what that last one is but it's making me crave an iced cinnamon bun.

Selina's campaign trail leads her to Detroit, Michigan, but it's her daughter who steals the headlines. Guest starring Law & Order's Chris Meloni.

Even deadly hitmen had to deal with high school. A superb black comedy, where John Cusack plays a successful hitman going back home for his high school reunion. He tries to hit on past flame Minnie Driver, while trying not to get taken out by rival hitman Dan Aykroyd.

It's also got a cracking soundtrack, featuring songs from The Clash, David Bowie, Faith No More, Souxsie and the Banshees, The Specials, Pixies, The Pogues, and the score is composed by Joe Strummer himself.

The Fight. This unusually lacklustre instalment from the procedural FBI drama was the backdoor episode for the spin-off pilot. Even Forest Whittaker wasn't interesting enough as the head of this rogue BAU team.

The only reason it's worth watching is for Welsh actor Matt Ryan - who gives us a taste of his charm and acting chops before we see him take the lead as John Constantine in the new show about DC's Hellblazer comics later this year.

The sequel to the disaster spoof B-movie success of Sharknado (the first one) deals with a freak storm bringing an onslaught deadly sharks into New York City. If only we could see the Avengers deal with tornado sharks instead of aliens...

Security guard John Brown gets cybernetic enhancements and lots of built-in ACME-style gizmos after an explosion leaves him with substantial tissue damage. He joins the police force, and tracks down the villain who wants to steal the cybernetics technology.

It's like a Disney-fied and family-friendly version of RoboCop.

Norse gods Thor and Loki must put aside their sibling rivalry and work together to fight the Dark Elves and stop them from getting to Jane Foster, who just happens to be possessed by one of the powerful Infinity Stones.

A retrospective on Kate Bush's music career in anticipation of her London shows this year. From her breakthrough hit with Wuthering Heights in 1978 all the way up to her 2011 album 50 Words for Snow, we discover her legacy, her talent and the impact she had on current artists.

With contributions from musicians - Tori Amos, Peter Gabriel, Pink Floyd's David Gilmour, Elton John - to writers and comedians such as Stephen Fry, Neil Gaiman, Steve Coogan - all of whom have been inspired by her in one way or another.

Highlights from this year's Reading Festival start at 7pm, but we're going to pick the closing act: co-headliners and mighty rock super-group, Queens of the Stone Age.

Newcastle will looking for more encouragement after their spirited display against the champions last week, while Aston Villa will be looking to put last season's troubles away with another win.

Deep Breath. New Doctor! New series! New adventures! Series eight is finally here, which means we can finally see the sublime Peter Capaldi don his new threads and take on the mantle of the 12th Doctor.

We've been told he will be a 'fiercer, madder, less reliable Doctor' who isn't quite as tolerant of humans as previous time lord incarnations have been. As he tries to figure out who he is and how his new identity affects his friendship with Clara, he also has to deal with a dinosaur running amok in Victorian London, with the help of Team Vashtra.

Business as usual then.

Arguably one of the best British comedy films ever, with scene-stealing performances from just about everyone in the motley-crew cast and an upbeat soundtrack that'll get stuck in your head for days.

Robert Carlyle is the heart and soul of the movie, though, as he rounds up a group of unemployed steel workers in Sheffield to form a striptease act to pay bills and ensure he can see his son. At turns funny and heartfelt, this is a must-watch for everyone.

The circus arrives in Belgium, where the epic Spa-Francorchamps circuit is in turns both beautiful and terrifyingly unforgiving. Spa is always an eventful race, and we can't wait to see this year's drivers battle it out. It's all still up for grabs...

Prequel to the epic sci-fi show, set ten years into the First Cylon Wars. Luke Pasqualino plays young William Adama, a cocky young pilot who's fresh out of pilot-school and gets assigned to the Galactica.

An Adventure in Space and Time BBC Two HD, 10pm

Still hankering for more Doctor Who after yesterday's series eight premiere? Whet your appetite with this film that lovingly dramatises the very early days of the show.

We're taken back in time to 1963, when William Hartnell was cast as the First Doctor and Verity Lambert was an ambitious producer, and the cast and crew were busy bringing about the very first episode of the longest-running sci-fi show to our screens.

The Hitchhiker's Guide to the Galaxy BBC Two HD, 11.30pm

In the beginning the universe was created. This made a lot of people angry and has been widely considered as a bad move.

Sit back, relax, and don't forget your towel as we hitch a ride with Arthur Dent, Ford Prefect, Trillian, Zaphod Beeblebrox and Marvin the Paranoid Android across the galaxy.