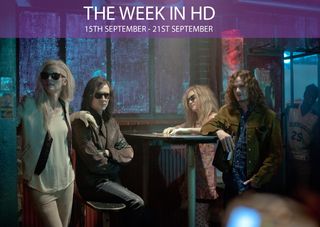 Jim Jarmusch treats you to a vampire movie as it should be done. His approach - contemplative yet quirky - is entirely compatible with Tom Hiddleston and Tilda Swinton's offbeat turns as Adam and Eve.

The Adam and Eve? Maybe. Vampires haven't felt so fresh or fun in decades. This is how you rescue a genre.

A wannabe musician (Domhnall Gleeson) gets sucked into playing keyboards for eclectic band Soronprfbs, as they try to record an album and play a gig at the SXSW festival Texas amidst musical and personality clashes.

With themes of mental illness, artistic credibility and identity running through, the odd little film takes a light tone to mask over the undercurrent of melancholia. Maggie Gyllenhaal's prickly Theremin-playing Clara is magnetic, while Michael Fassbender (the eponymous Frank) manages to be endearing, sympathetic and enigmatic - even while wearing a large false head throughout the film.

Stylish yet brutal bloodbath horror Wolf Creek (2005) is one of the scariest films to come out of Australia, but its sequel is more likely to amuse than terrify.

Check out our full review of the Wolf Creek 2 Blu-ray, out today.

Golden Days for Boys and Girls. It's time to bid farewell to Enoch 'Nucky' Thompson and his merry band of gangers of Boardwalk Empire, which comes to an end in its fifth and final series.

Leaving behind the glitz and glamour of the roaring twenties, we jump seven years ahead and plunge deep into the stricken end of the Prohibition era: the Great Depression. It's 1931, and with a Democrat president about to enter office, the alcohol ban soon to be repealed, and the threat of war, things aren't looking good for Republican Nucky's political hold or the bootlegging business.

When two per cent of the world's population goes missing in a Rapture-like event called the 'Sudden Departure' - what happens to those left behind?

That's the question posed by this new HBO show, with Justin Theroux, Christopher Ecclestone and Liv Tyler heading the cast. The people of the small town of Mapleton, New York are trying to move on with their lives three years after the event, while a creepy cult called the Guilty Remnant are determined to make sure no one forgets.

Pastry. It's the weird and wonderful world of pastry tonight, starting with signature savoury parcels - anything from pasties to samosas to wellingtons.

For the technical, Paul Hollywood has chosen the little known "kouign amann" - is he just being cruel or have they exhausted all the pastry ideas on the show?

And for the showstopper, the bakers must present two types of eclairs in appropriately show-stopping fashion.

Night Zero. When a rapid response team is sent to investigate the mysterious death of 206 passengers on a plane, the last thing are were expecting is an outbreak of vampirism.

Adapted from the horror novels by Chuck Hogan and Guillermo del Toro (of Pan's Labyrinth, Hellboy and Pacific Rim fame), the show is a fast-paced, gory thriller and its strength lies in Del Toro's talent for building a layered, believable world where forensic teams battle ancient vampires to stop the virus from infecting the world.

Earth 2046. After years of war between aliens (who were looking for a new home after their star system collapsed) and humans (who don't really like sharing earth-space), the two races are attempting to cohabit peacefully on this brand new earth-scape.

The alien technology has transformed the earth's biosphere, too, and the show's spectacular CGI work is crucial in creating mutated flora and fauna and new alien species.

In tonight's second series premiere, the small independent town of Defiance has been taken over by the greater Earth Republic government, ousting the mayor (Dexter's Julie Benz). Elsewhere, alien Irisa (Stephanie Leonidas), is reunited with her adoptive father - but won't mention her prophetic visions.

We would never miss a chance to include Die Hard in The Week in HD.

If you've seen it, you know the drill. If you haven't, then boy are you in for one of the best two hours of your lives.

The Silence of the Lambs ITV4 HD, 10pm

Missing your weekly dose of Hannibal? Reacquaint yourself with everyone's favourite cannibal serial killer in the chilling original (and arguably best) film, with Anthony Hopkins putting his stamp on the iconic role, while Jodie Foster is incomparable as FBI agent Clarice Starling.

Time Heist. The Doctor turns bank robber in this brilliant crime caper episode. With Clara, a shape-shifter and cyber-augmented gamer on his crew (we hope there's an Ocean's 11-style crew round-up), the time lord is forced to break into the Bank of Karabraxos - most dangerous bank in the universe.

Amidst dodging a deadly security system, the Doctor comes face-to-face with The Teller: a powerful creature that can detect guilt.

A bleak, brutal yet riveting war film set it in 1940s Eastern Europe, where four Jewish brothers help hide and protect a group of refugees in a forest when fleeing from Nazi Germany.

We head to the shiny Marina Bay Street Circuit, home to the night-time racing of the Singapore GP. We've given up trying to guess who's going to win, although expect a tussle between the Mercedes drivers as tensions (and the track temperature) hot up.

The hugely popular period drama is back. It's 1924 and the household of Downton has to deal with the first ever Labour government - amidst their personal dramas, of course.

While we wait for the stylish crime drama set in 1919 Birmingham to return for a second outing, let's revisit the brilliant first series when we were introduced to the Peaky Blinders gang. Cillian Murphy stars as head-of-the-family Thomas Shelby, whose ambitious plans to expand their family and their criminal reach grabs the attention of one Inspector Campbell.

In the finale, Shelby decides its time to get rid of Billy Kimber and take over his horse-race betting enterprise, while Campbell plots to destroy the family for one last time.