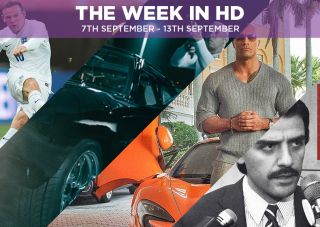 A franchise that no one thought would make it to the seventh round sees Dominic Torretto and co on a job to retrieve a computer terrorism program called the "God's Eye", while also being pursued by Jason Statham's Deckard Shaw, the brother of Owen Shaw (left in a coma in Fast 6).

Statham appears, like the Terminator, with unerring accuracy, and Paul Walker gets a fitting, emotional send-off after passing away during the film's production.

It's bonkers and has little to do with the franchise's roots, but it does have an enormous sense of fun.

Buy Fast and Furious 7 on Blu-ray at Amazon

Another (sigh) found-footage film that this time unfolds in front of a computer screen. The premise sees a group of friends haunted by a supernatural presence that's using the account of their dead friend. Yeesh.

Reviews seem to be split down the middle, applauding the film's commitment to its story even if it is a new spin on an over-familiar story.

Buy Unfriended on Blu-ray at Amazon

Jon Stewart, he of The Daily Show fame, moves into filmmaking with this film based on true events. Rosewater is about an Iranian-Canadian journalist detained by Iranian forces after believing him to be a US spy after watching a skit he did on The Daily Show with Jon Stewart.

There's quite a bit of torture, but it's spliced with a sense of humour that ensures it never gets too grim.

Buy Rosewater on Blu-ray at Amazon

Nick Wasicsko begins to feel the pressure – if he wasn't feeling it already – from both the media and the community about the Yonkers housing issues as he gears up for his mayoral re-election campaign.

Polyglots v Operational Researchers. Two of the highest-scoring teams from the first round get another chance at winning this fiendishly fun quiz.

Switzerland present a tougher opponent than San Marino, but England expects, and Rooney will have the chance to go beyond Charlton if he finds the net at Wembley.

Dwayne 'The Rock' Johnson stars as a former NFL player turned agent who's about 'deals and dollars', as he looks to make his football playing clients rich.

It's from the same team behind Entourage, so expect lots of glossy, slow-motion shots of people walking about.

Pastry. It's pastry week on Bake Off, and the amateur bakers must some tricky techniques to get the right crisp, puff, fillings and flavour to their signature frangipane tarts, the cheese-filled flaounas (a technical challenge from Cyprus), and their showstopping classic 1970s canapes: vol-au-vents.

George is excited to meet a fellow werewolf, but the new guy doesn't get along with the other housemates. As he overstays his welcome, Annie and Mitchell try to convince George that Tully isn't all that he seems.

Jack Dee, Romesh Ranganathan, Gaby Roslin and Tinchy Stryder must keep a straight face as they tell tall tales - and hope that their rival team can't tell if they're telling the truth or a lie.

A animated classic, Pixar's first film set an unenviable task for the studio by being one of the best films of that, or any, year in the 90s.

The story, which everyone should be familiar with by now, sees a group of toys come alive when no one is watching. Woody (Tom Hanks) believes himself to be one of his owner's (Andy) good toys, but his alpha male status is questioned by a new, cooler action figure in Buzz Lightyear (Tim Allen).

The animation may have aged a fair bit compared with the latest films, but it's the story (and its charm) that resonates after so many years.

The international break is over as we return to the domestic leagues, and we have a few belters.

Chelsea has not got off to the best of starts, losing to Crystal Palace before the break, so they can't afford any more slip ups. Everton are in slightly better form, but the spectre of Chelsea's bids in the summer for their defender John Stones will loom over this match.

This match is followed by Manchester United facing off against Liverpool in the evening at Old Trafford.

Iron Man was the film that got the ball rolling for Marvel Studios, launching what would become a cinematic universe that other studios have fallen over themselves to copy.

The first film sees amoral billionaire industrialist Tony Stark captured in Afghanistan and made to make weapons for the shady Ten Rings group. Eventually he escapes, setting out to right previous wrongs, creating a suit of armour to fight against the terrorists.

Looking back it's a decent effort, with Downey Jr. fitting the role of Tony Stark like a glove and the cast convincing in their roles. Despite that, the showdown at the end is a letdown and the villain – a refrain that'll echo throughout the Marvel films to date – is weak.