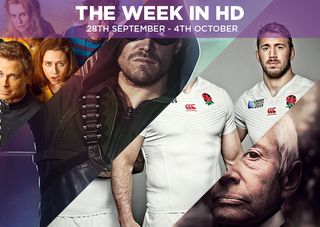 The Walking Dead shambles its way to a fifth series that's arguably the darkest one yet. While not much has changed – the group are still searching for a safe haven – the tension is razor sharp as the characters endure yet more hardship. Sounds fun!

Buy The Walking Dead: Series 5 on Blu-ray at Amazon

Spooks makes the jump to the big screen with Peter Firth's Harry Peace practically the only character to make it from the TV show. It's Bourne on a budget with Game of Thrones's Kit Harrington (is he dead or not?) on the hunt for a terrorist in London (Elyes Gabel – another Game of Thrones alumni).

Buy Spooks: The Greater Good on Blu-ray at Amazon

A rather disappointing third series of Arrow, which seems to have lost a bit of its spark. Stephen Amell convinces as playboy Oliver Queen (aka Green Arrow), but the series takes a shift to unwelcome sub-Batman territory with Ra's Al Ghul's League of Shadows featuring, along with some rather dud storylines.

Simon Pegg's solo ventures have been more miss than hit, Man Up seeks to redress this with a solid premise (a single woman is mistaken for someone else's blind date).

Though it boasts some decent comedy, it's a little too broad with some characters feeling out of place.

Buy Man Up on Blu-ray at Amazon

The Jinx: The Life and Deaths of Robert Durst Sky Atlantic HD, 9pm

The Jinx was the topic of much controversy when it ran in the US earlier this year. This six-part series documents the life of property heir Robert Durst, a man accused of several murders but never convicted.

One of the more unique pieces of television you'll see, Durst was arrested earlier this year thanks to new evidence uncovered by the show.

In its first series, The Last Man on Earth struggled to find its groove. Here's hoping the second series does better.

Is There Anybody Out There? sees Phil (Will Forte) and Carol (Kristen Schaal) leave the house and go on a road trip, with complications and unexpected situations not far behind (we wisely predict).

Chelsea's domestic struggles continued as they battled back from two goals down to draw against Newcastle. In Europe they've been a different proposition, putting four past Maccabi Tel Aviv.

Porto present a trickier proposition as Mourinho returns to the club where he made his name.

Trevor Noah takes the reigns of The Daily Show from John Stewart and has some mighty big shoes to fill.

Noah's rise in the US has been meteoric, but it hasn't been without controversy as attention was drawn to some ill-considered jokes he made in the past.

We don't know what to expect, but it'll be interesting to see whether he hits the ground running.

Manchester United suffered a setback in a match they should have won against PSV Eindhoven.

Wolfsburg (owned by beleaguered car manufacturer Volkswagen, fact fans) won't be an easy, but United need a win at Old Trafford to get their campaign up and running.

You, Me and the Apocalypse Sky 1 HD, 9pm

A line up that makes you rub your eyes with disbelief; Rob Lowe (Parks and Recreation), Jenna Fischer (The US Office) and Megan Mullaly (Will & Grace) join a British cast in this comedy about a group of people as a comet heads towards Earth.

As characters band together - in Slough of all places - they retreat to an underground bunker to watch the last days of Earth play out on television.

If you're up late, you can catch this 1980s classic. Fatal Attraction stars Michael Douglas as a lawyer who has a fling with Glenn Close, but when he chooses not to pursue a relationship she unleashes all kinds of fury, leading to the infamous 'bunny boiling' scene.

A film that adds weight to the saying 'hell hath no fury like a woman scorned'.

Prolific documentary maker Alex Gibney sets his sights on Scientology in a film examining the church's history and its prominence in modern culture.

Eight former members were interviewed, including Oscar winner Paul Haggis, and the insight into the practices of Scientology and behaviour of its members is revealing.

Conventional wisdom suggests that New Zealand should easily win this match, but Georgia will need no extra motivation as they take on the All Blacks.

We won't spoil the story, but safe to say Chris Evans throws his frisbee at people very fast and very hard, with The Winter Soldier himself topping Marvel Studio's admittedly weak rogue gallery of villains. The action scenes are brilliant too.

Read our review of Captain America: The Winter Soldier

Defeat to Wales has made this a must-win match for England.

England has had the rub of the green against Australia in World Cup matches, but the pressure of the occasion means there's added spice to this match.

A breakout hit in 2011 (was it that long ago?), Bridesmaids sees Kristen Wiig's Annie taking on Rose Byrne's Helen in a battle to be the Maid of Honour for Annie's best friend Lillian (Maya Rudolph).

Though there's nothing here that you wouldn't expect from a typical Judd Apatow film, Paul Feig (director of next year's Ghostbusters reboot) keeps the gag rate going so Bridesmaids never feels flat, even if the story is predictable.

The Dolphins face the Jets as the NFL comes to Wembley. We'd love to explain what's going on and who the best players are, but quite frankly we don't have a clue.

We do know that you better clear some space on Sunday. This show will go on and on and on…

It's winter. Combo, Lol and Woody see the promise of a new beginning but things don't quite work out as expected.