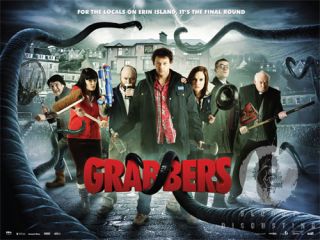 Happy New Year everyone, and I hope you've all had a wonderful and shiny Christmas! Welcome back to The Week in HD in a bright new 2013, your guide to all the must-see high-definition films, TV shows and sports to grace your screens this week.

There's some potentially great TV shows hitting your screen this year (Revolution, Inside No9, The Following, By Any Means), not to mention the return of favourites (Being Human, Game of Thrones, Doctor Who, hopefully Sherlock...) and a film list that includes every single Marvel sequel possible, and the much-anticipated Star Trek Into Darkness.

And without further ado, here's our pick of the week:

A low-budget Anglo-Irish monster invasion film? Could be so silly and overdone, but this is a gem of a film that's fast becoming a film fan favourite. A remote Irish fishing island is suddenly invaded by gigantic blood-sucking Lovecraftian alien monsters, whose only weakness is alcohol.

Which means that the only way to survive the attack is to get monumentally drunk. Starring Richard Coyle, Ruth Bradley and Russell Tovey, Grabbers is a great way to start off 2013.

James Cameron's epic sci-fi adventure about a soldier's mission to the exotic planet of Pandora is still a visual feast with some stunning CGI - especially that glowing forest. Stars Sam Worthington, Sigourney Weaver and Zoe Saldana.

There are some weird and wonderful (but mostly weird) animals out there that have some extraordinary survival skills. Tonight we've got frozen frogs that can bring themselves back to life, a mysterious creature is unmasked, and 'the underworld of real life zombies.'

When fans learn that the Muppets' old theatre is going to be torn down by an oil tycoon, they decide to reunite the Muppets, who've been split up for years now, to put one last show to save the theatre and rekindle the Muppet magic. Co-written by Jason Segel, and starring Amy Adams, Rashida Jones and all the Muppets.

Tim Burton's at his best when doing stop-motion animated films, and Corpse Bride has all the Burton hallmarks of Gothic Victoriana, colourful macabre, the undead and undying love. A nervous bridegroom finds himself accidentally married to the wrong woman, who just happens to be dead.

A little-known and short-lived HBO series, Carnivale was one of the most ambitious and intriguing stories to have been conceived. Set in the United States during the Great Depression and Dust Bowl era of the 1930s, it follows two separate story lines – one of Ben Hawkins, a young man with mysterious healing powers who joins a travelling carnival, and the other of Methodist preacher Brother Justin Crowe, who has the ability to manipulate humans and inflict terrifying visions based on their sins.

The two men are linked by the same prophetic dreams, and has an overarching theme of good vs evil mixed with Christian theology, agnosticism and Masonic lore. Visually it's hypnotic, with the sepia tone and swirling dust adding to the mystery of the carnival itself, and the characters are fascinating. If you're going to invest in any series this year, let this one be the first.

I suspect I've recommended this before, but Margot Fonteyn is mesmerising. This documentary explores her life and legacy as the one of the greatest classical ballet dancers of all time.

Part two of this year's compilation show, full of the best bits from the J series. Featuring Stephen Fry, Alan Davies, and a whole host of guest panellists.

Nikki Heat. Castle is at its best when it's poking fun at its own show, at the actors/characters themselves, and just generally having way too much fun with the script.

Castle's Heat Wave novel is being made into a film, and the leading lady (played brilliantly by That 70s Show's Laura Prepon) decides to tag along to shadow the real Nikki Heat: Detective Beckett. Things get hilarious when she goes just a little too method...

Quentin Tarantino intertwines the stories of a band of Jewish Americans and a French cinema owner on the run in this war movie homage set during the Second World War. Their one aim: to kill Hitler.

With Brad Pitt, Melanie Laurent, Daniel Bruhl, Michael Fassbender and a scene-stealing Christoph Waltz as the menacing Hans Lauda – this is a slick, funny and violent film as only Tarantino can pull off, with a great soundtrack to back it all as usual.

Rhys Thomas's full-length cut of his film explores the solo career and private life of one of rock and roll's legends, Freddie Mercury. Along with being the frontman for Queen, the film takes a look at his solo projects, which included a little-known collaboration with Michael Jackson, and the Barcelona project with Spanish soprano Dame Montserrat Caballe.

A second outing for Guy Ritchie's action-packed version of Holmes and Watson, with Robert Downey Jr and Jude Law on terrific form. As Watson marries, Holmes disrupts his honeymoon by whisking him away to take on his arch-nemesis: Professor Moriarty.