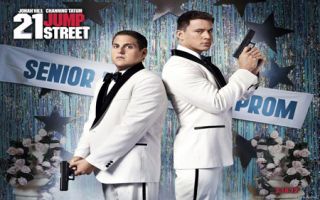 Hello everyone, and welcome to The Week in HD, our weekly guide to the best high-definition TV shows, films, sports and Blu-ray releases to grace your screens. A great sports weekend: Andy Murray may have been the first British player to reach the Wimbledon finals since 1938, but sadly no trophy-lifting for him, while Red Bull's Mark Webber won a surprisingly dry British Grand Prix. Next up: The Olympics.

Channing Tatum and Jonah Hill star in this remake of the cop-disguised-as-high-school-student series that made Johnny Depp a heartthrob in the 1980s.

It's Tatum and Hill's mismatched buddy-cop chemistry that makes the film work and is full of Superbad-style laughs. There's even a suprise cameo from an original cast member...

While the historical events of D-Day has been told through the eyes of soldiers, generals and tacticians, Ben Macintyre presents it through the eyes of the handful of spies who, through espionage, deceit and some dastardly clever thinking, also made D-Day successful.

A new offering from celebrated scribe Alan Sorkin, set in the behind-the-scenes world of American cable TV news, with Jeff Daniels as a beloved news anchor, who comes back from a forced holiday to find out his entire news crew has been replaced, and they don't quite like him. Full of Sorkin-esque lightning-fast barbs, it takes cues from real news stories.

A French 3D animated film set in Paris 1910, about two friends who accidentally create a monster whose appearance starts to terrorise Parisian citizens and catches the attention of the Chief of Police - but is befriended by a cabaret singer who discovers that the monster has a lovely singing voice. With the voice talent of Vanessa Paradis.

The Scream franchise is unqiue in having pretty decent sequels - the fourth instalment is set ten years after Scream 3, and has a whole set of new rules on how to deal with the new generation of horror movie tropes. While the first Scream film is still the best for its originality, Scream 4 retains that same mix of suspense and humour, and it's a great watch.

Jack Black's slacker guitarist turns a classroom of young prep school students into a rock band to compete in the Battle of Bands to help out his own financial issues. All the child actors play the instruments in the film, which has one of the best rock references and soundtracks. Ever.

The DoSAC offices are in quite a state as shadow minister Peter Mannion drops by for a pre-election visit with his entourage in tow. Meanwhile, Nicola has her own problems as her daughter's headmaster calls with some news that leads to one of the best Malcolm Tucker dressing down rants ever.

The 2012 season of the BBC Proms is also its 118th show, with a spectacular concert of all-English music from the Royal Albert Hall.

Christopher Nolan introduces a new generation of Batman films with this brilliant origin story of Gotham's Caped Crusader. Christian Bale is excellent as Batman, Michael Caine is sublime as Alfred, Morgan Freeman is super cool as Lucius Fox, and Cillian Murphy is wonderfully creepy as Scarecrow.

Henry IV, Part 2. After the Battle of Shrewsbury that took place in last week's episode, Norhtumberland learns of the death of his son, while the frail King becomes even closer to death. Falstaff, on the other hand, is hoping for a position in high office once Prince Hal takes the throne. Starring Jeremy Irons, Tom Hiddleston, and Simon Russell Beale.

Exactly what it says on the tin: there are some cowboys, and then some aliens attack, and the cowboys try to stop the aliens attacking. In the middle of all this, there's Olivia Wilde (spoilers!) regenerating. Set in dusty Arizona in 1873, Jon Favreau's sci-fi western may not have done as favourably as Iron Man, but if you've ever wanted to see Indiana Jones and James Bond together, here's your chance.