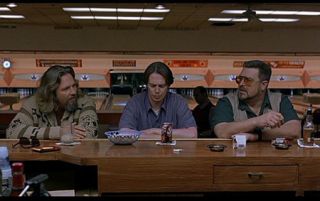 Hello everyone, and welcome back to The Week in HD - our guide to the best high-definition films, TV shows and sports to grace your screens.

The Coen brothers' cult comedy is loosely based on Raymond Chandler's The Big Sleep, about LA slacker 'The Dude' who gets mistaken for a millionaire businessman, and then gets involved in an increasingly trippy and bizarre extortion plot. Starring Jeff Bridges, Steve Buscemi, John Goodman, and Julianne Moore.

The Hungry Earth. The Doctor and the Ponds visit a mining village in Wales, where an ambitious project to drill right into the centre of the Earth awakens the long-dormant Silurians – former rulers of the Earth – who now want their planet back.

Last week's showstopper challenge was to bake cakes with the designs on the inside, which must be hell to make, but was brilliant to watch. If I've learnt anything from this show, it's that bread is ridiculously hard to make, and tonight's episode has the contestants stressing out while baking flatbread and bagels.

The crime drama continues, with Luther racing to stop a trained sniper from killing off fellow police officers.

Reginald D Hunter is always a delight, and his banter with both Hislop and Merton never fails to leave me in fits of giggles. Miranda Hart is in the guest host chair.

Easy A is smart, sassy and fun film about Olive Penderghast, a witty but clean-cut high school student who gets caught in the school's malicious rumour mill. Stanley Tucci and Patricia Clarkson are hilarious as Olive's parents, and uber cool Emma Stone carries the entire film brilliantly.

If you're missing the Olympics, have some Usain Bolt, Jessica Ennis and Tom Daley chatting away on Ross's sofa.

The story follows the life of civil servant Christopher Tietjens adjusting to the aftermath of the First World War and struggling between the two women in his life: his unfaithful wife Sylvia, and the young suffragette Valentine whom he falls in love with.

To tie in with BBC's lavish adaptation, this documentary celebrates the epic classic novel by Ford Maddox Ford, with various writers and actors discussing the book, along with exploring the challenges of adapting it to the screen.

Sadly, there's no new Top Gear this summer, but here's the most recent series to keep you company. The boys head to Italy to test three supercars, driving around the busy city centre of Rome, and ending up at the legendary Imola circuit with a race against the Stig.

The creators of South Park are back in full satirical form with a feature film lampooning big-budget action films with a focus on ridiculing American politics and Hollywood – all in Thunderbird-style marionette puppets.

It's loud and brash and vulgar and clever and hilarious – everything you'd expect from Trey Parker and Matt Stone.