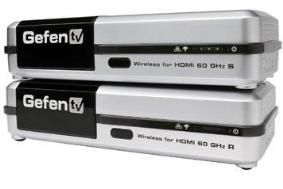 Just launched is the GefenTV Wireless for HDMI 60GHz extender system, allowing the transmission of 1080p video and multichannel audio over distances up to 10m.

That makes it suitable for connecting the output of a player or AV receiver to a TV or projector, or indeed between player and receiver.

Both the sender and receiver are powered by external 12V transformers, and have HDMI sockets and RS232 control ports. Pairing is achieved at the push of a button, and the multiantenna transmission and reception from SiBEAM, with 36 internal antennae, is designed to ensure uninterrupted connection.

Firmware updates are possible via the RS-232 ports, the system comes with an infrared remote control for power on/off, and it's in US shops now at $999.