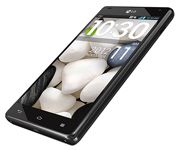 Apple has suffered another setback in its home market, with lower-than-expected sales of the iPhone 5 allowing rival LG to steal the number two spot in the US phone market in the peak December selling period.

It's the first time there's been a Korean one-two in the States since Autumn 2011, when Apple launched the iPhone 4S and overtook LG. Strong sales of LG's Optimus G (above) and Nexus 4 smartphones, along with its strength in the 'feature phone' market, saw LG rise to a 13% market share in December 2012, overtaking Apple on 12%.

The market is still dominated by Samsung, which has a 33% share, but Apple's poor performance has also seen Motorola raising its share to 9%, and HTC to 8%.

The report comes among widely-reported claims that Apple is scaling back its requirements for parts for the iPhone 5, which has affected a range of companies including display manufacturers Sharp, Japan Display and LG Display.

Sources including the Wall Street Journal have reported Apple halving iPhone screen orders for the first three months of this year, while Reuters reported Sharp has reduced its output of panels for the iPad.

But analysts seem divided over the reason for the reported reductions, with suggestions running from poor demand to better manufacturing yields meaning less components are wasted, and even the imminent arrival of a new Apple iPhone model, already being talked of as the iPhone 6, rumoured to be on the way in the Summer.

LG says it had sold over a million of its Optimus G smartphones worldwide by the end of last year, but there are said to be shortages of the Google Nexus 4 smartphone (left) it makes.

It's apparently sold out in the States, and has seen ten times greater demand than was anticipated in European markets, including the UK.

LG is said to be increasing production of the Nexus 4 next month in order to meet the demand for the Google-branded device.

And it's also being reported that LG will launch an Optimus G Pro version in markets including Japan in the next few months, according to an apparent leak of specifications and teaser images.

It's thought that, with a Samsung Galaxy S IV on the way and the possibility of an iPhone 6, LG is keen to at least one more 'premium' smartphone on sale ahead of its rivals.

How does the Google Nexus 4 square up to the iPhone 5? Click here for our verdict