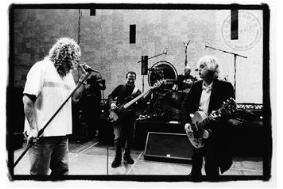 Posted 22.06.10: Unilet Sound & Vision, based in south west London, will hold an exhibition of rare photographs by leading rock photographer Ross Halfin as part of its Xpo open day on Saturday, July 10th.

Ross Halfin is one of the world's leading rock photographers, having shot many of the greatest bands since the 1960s. His work has featured on many celebrated album covers, including the iconic Led Zeppelin IV and Paul Weller's Stanley Road.

Working with acts such as The Who, Iron Maiden, The Beatles and many more, Ross has toured the world capturing major music events on camera.

A long-standing Unilet customer, Ross has agreed to stage an exhibiiton of his work during the Xpo, showing more than 30 rare (and sometimes never before seen) photographs from his collection. They include images of The Rolling Stones, White Stripes, Pink Floyd, ZZ Top, Paul Weller, The Clash and Amy Winehouse.

Vinyl lovers can browse thousands of rare new and used records on sale, and refreshments will be provided all day from the gourmet barbecue.