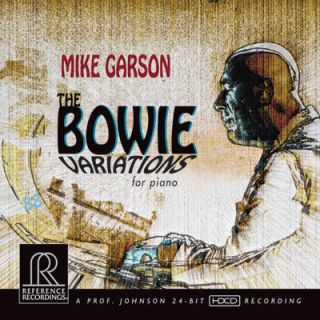 I don't often suggest you take a listen to a particular disc: after all, musical taste is a pretty personal thing, and one person's breathtaking piano jazz is another's lift-music.

But there's a bit of a closet Bowie fan-base here in the WHFSV office, from one-time completist Simon Lucas to myself and photographer Steve Waters, both of whom are old enough to remember seeing the Dame on his Ziggy Stardust tours, back in the (whisper it) early 1970s, so I thought I'd pass this one on for those of a similar persuasion.

I have to say I had serious misgivings when I got the press release from Reference Recordings in the States about Mike Garson's new disc The Bowie Variations: I have a serious problem with so many 're-interpretations' of music I love, to the extent that despite being a big fan of Philip Glass, I really loathed his ponderous, over-portentous Heroes Symphony, based on Bowie's album.

But I really needn't have been so concerned that I was going to be confronted with lounge versions of the Bowie catalogue, a la Mike Flowers' Wonderwall – Garson's disc is no novelty item, but rather a beautifully crafted disc of solo jazz arrangements from the pianist who was, after all, described as 'the fourth Spider'

While David Bowie himself may have insisted that The Spiders from Mars were only really three – guitarist Mick Ronson, bassist Trevor Bolder and drummer Mick 'Woody' Woodmansey – it was pianist Garson who joined the first Ziggy Stardust tour at very short notice, and whose jazz styles played so great a part in the band's sound at the time.

It's Garson's atonal solo you hear soaring through Aladdin Sane, the pianist later telling an interviewer 'It was just two chords, an A and a G chord, and the band was playing very simple English rock and roll. And Bowie said: “play a solo on this.”

'And I said: “Are you sure? ‘Cause you might not be working anymore!” (laughter). So I did the solo that everybody knows today, in one take.

'To this day, I still receive emails about it. Every day. I always tell people that Bowie is the best producer I ever met, because he lets me do my thing.'

In the same interview, Bowie's long-time collaborator Tony Visconti was quoted as saying 'Mike Garson listens attentively, then plays whatever the hell he wants.'

Garson got his gig after an audition in front of Bowie and Mick Ronson in the RCA studio in New York – 'Mick, who was a well-trained musician and also a great pianist, gave me the chord changes to the song Changes. He put it up to the music stand.

'And I think I played only six or eight bars, six or seven seconds, and he says: “You've got the gig!”'

Garson went on to play on some of the best-known Bowie tracks: his piano underpins We Are the Dead on Diamond Dogs, and also the title track of Young Americans.

In all, Garson has been working with Bowie for the better part of four decades now: not bad going for an eight-bar audition.

So, The Bowie Variations, then: a series of short piano works based on tracks such as Space Oddity, Life on Mars, John, I'm Only Dancing, Ashes to Ashes and, of course, variations on the song that started it all, Changes. And each and every track is surprising, involving, and just superb.

Using a Yamaha Disklavier piano, which is able to record a performer's playing then play it back on cue, Garson has created multiple layers of sound while still playing live – 'It's like having six hands,' he says.

The music was recorded at the Oxnard Centre for the Performing Arts in California, which Reference Recordings has used several times in the past – and what a recording it is!

In the hands of engineer 'Prof' Keith O Johnson (left), Reference Recordings' chief engineer and technical director and fresh from his success in the most recent Grammy Awards, this HDCD-encoded disc is perhaps the best-sounding piano disc I have ever encountered.

It has a stunning sense of the presence of the instrument in a very real acoustic, and really breathtaking percussive impact as the hammers hit the strings.

Plus there's a beautiful combination of close-up definition and the natural decay of notes.

I've only ever really heard a piano sound much better than this once, and that was when I sat up close and personal at a very small, intimate recital given in the Bosendorfer Hall in Vienna last year, after a day spent touring the company's piano factory.

Yes, this recording is that good.

And even if you just want to hear just how good a CD can sound, with a disc able to push your system to its limits, this is one you should have.

The Bowie Variations by Mike Garson is released by Reference Recordings (RR-123), and distributed in the UK by Metronome.