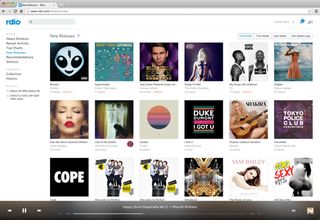 As part of the deal, the Rdio streaming service is filing for bankruptcy and looks likely to shut down in the coming weeks. A Rdio blog post said, "Rdio's service will not be interrupted today. We will have more updates in the coming weeks on what this process means for your Rdio account, but for the time being the service continues unchanged."

Pandora has paid $75 million for "key assets" from Rdio, including "technology and intellectual property", while also offering jobs to some members of Rdio staff. Pandora expects to offer an "expanded Pandora listening experience by late 2016".

Currently only available in the US, Australia and New Zealand, Pandora Radio is offers an automated streaming radio service which plays related tracks based on your selected artists. Users like and dislike the curated tracks to improve the recommendation process. You can also buy tracks through the service, while earlier this year the company paid nearly half a billion dollars to acquire Ticketfly in order to offer concert ticket sales.

The service, which offers a free, ad-supported service as well as monthly and annual subscription plans, reported 79.4 million active users in July 2015. Pandora is clearly now looking to expand its music offering - and presumably its worldwide reach - to stay competitive alongside the likes of Apple Music and Spotify.

Rdio was launched by the founders of Skype in 2010 and offers over 35 million tracks to subscribers in some 85 countries. Despite good reviews and innovative features, the service struggled to make its presence felt in the streaming market, not least outside of the US.

It follows the news that streaming service Qobuz entered receivership yesterday. The French company, which focuses on lossless streaming and hi-res downloads, claims it is confident a buyer can be found in order to continue operating.