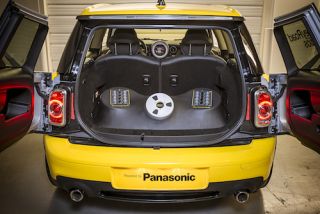 The aim is to "recreate the unique sound characteristics present in recordings made at the studios".

Users of the music streaming service Aupeo! can also listen to a selection of tracks produced at the studio over the years, through a dedicated "Abbey Road Studios Demo Channel" found on the service.

The Panasonic-owned Aupeo! music service also announced a price-cut for new and current subscribers. The reduced rate is €2.99/month in Europe and $2.99 in the US, with 12-month subscriptions costing €29.99 and $29.99 respectively.

The Abbey Road Studios Mini Cooper Clubman is on the show floor at CES 2014 so we'll be back with our first impressions very soon!