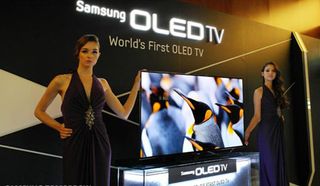 The Korean giants' race to be first in the shops with superthin organic electroluminescent TVs seems to be slowing – which means there might even be some chance for the big Japanese names to catch up. Or just ever-thinner TVs fighting over ever-slimmer pickings...

As revelations go, the one from Japan's Nikkei earlier this week wasn't exactly a biggie. With a week to go until the end of 2012, and not a sniff of next-generation TVs in the shops, the prediction that 'South Korea's two major television makers are unlikely to release organic electroluminescent TVs by year-end as they had planned' looks like something of a safe bet.

And reading between the lines, there was just the slightest hint of glee in the report that while Samsung showed its 55in OEL TV (above) at CES 2012 almost a year ago – we're only a couple of weeks off the 2013 show – it has struggled to make the display panels reliably enough to make them viable.

That means its absolutely definite plans to sell the TVs before the end of this year, announced back in May, have been put on hold. Again.

Just as we reported back in October.

Trouble is, like most new technologies, OEL – as we seem to be calling it this week, though you may know it as OLED – is proving a bit tricky to scale up from prototype or test-production runs to full industrial scale.

The technology may be tempting, with its superthin screens and supersharp resolution and contrast thanks to its self-illuminating technology – unlike LCD screens, which need some form of backlighting, usually from LEDs these days – , and lower power consumption.

But it's proving hard to get sufficient yield in manufacturing to make the TVs profitable.

In other words, they're having to throw away too many substandard screens, and that makes every display passing muster pricey to produce, with 'sources close to the matter' telling the Nikkei that had Samsung gone ahead and launched OEL TVs in the last quarter of this year, it would have lost money on every set sold.

As a result, sales are now slated for the first three months of 2013. Hopefully.