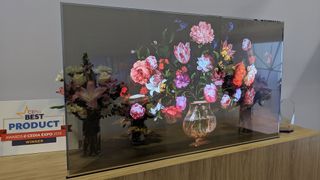 If you want to attract attention on a busy show floor you have to bring something special. And from million-dollar displays to high-end cinema rooms, there's plenty to grab the eye at this year's CEDIA Expo. And you can add to that list the super-slim LG Transparent OLED.

Launched at the start of the year, the LG 55EW5F-A Transparent OLED is making its US debut at CEDIA and it's certainly causing a few double takes, promising impressive pictures as well as a new level of transparency.

The 38% transparency is "much higher" than conventional transparent LCD displays, while there's 400 nits brightness for images on screen. It's a 55-inch screen here with a full HD resolution and 7.9mm-slim bezel. It's almost as impressive viewed from the side, measuring just 6.6mm deep. Connections come in the form of HDMI, DP and USB inputs.

Designed for the signage market rather than as a TV, LG's Transparent OLED is customisable and expandable, giving you plenty of options when it comes to size and positioning. You can even add AR effects to add another dimension.

Now can we have a Transparent OLED TV?