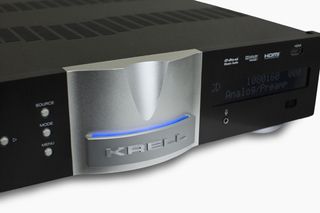 We first clapped eyes on the Krell Foundation at CES back in January, and we're impressed enough then to vote it one of our Stars of CES 2013.

It's now landed here in the UK courtesy of distributor Absolute Sounds, with a price tag of £6500, and will be available from July. For the money, you get a 7.1 channel preamp/processor with 'state-of-the-art digital audio processing' and the legendary build quality for which the Connectcut-based company is known.

3D TV passthrough comes as standard, along with automatic set-up and room EQ, 10 HDMI 1.4a inputs, a pair of HDMI outputs (both of which feature Auto Return Channel (ARC) so a TV or display can send audio back down the cable to the processor.

One new development is 'Intelligent HDMI' switching, which Krell says is "a combination of circuitry and innovative software that optimises HDMI operation". All 10 source inputs are permanently active, so channel, source, video resolution and audio format changes are instantaneous.