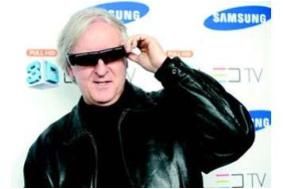 It was also announced that Samsung has increased its sales targets for 3D TVs based on initial consumer enthusiasm, and now expects to sell more than 2.5m sets this year, rather than the 2m it originally planned.

“We have already received an order of about one million units of the high-tech TV, though we struggle to meet soaring demand due to lack of panels for 3D TVs,” he added. “Total sales volume this year is expected to exceed 2 million units."

Commenting that the company had sold 2.6m LED-lit TVs in the first year of their availability, Yoon said that "The sales of 3D TVs will surpass that". He concluded by saying that Samsung is committed to shaping and leading the 3D TV market.

Speaking in Korea, Cameron told reporters that he expected the adoption of 3D in the home to be faster than it will be in the cinema, where he predicts 20% of movies will be 3D within three years, and 50% by 2018.

He also claimed that within five years it will be possible to watch 3D TV at home without the need for special glasses.