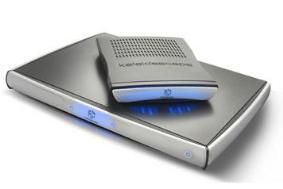 Once Blu-ray discs have been imported on to the server's hard disc, owners with multiroom home cinema systems can watch their film libraries in high definition throughout the home.

However, in order to keep the Hollywood studios happy, the Kaleidescape system requires the physical Blu-ray disc to be in the tray of the M500 or M300 for the film to play from the server.

Given that many owners of Kaleidescape systems have large film libraries, the company says it's developing a disc loader which will store a large number of discs within the system, and make it easy to find and retrieve a disc.

Other improvements on the M-Class servers include an upgraded onscreen user interface. The Kaleidescape Movie Guide has been expanded to include more than 3300 Blu-ray disc titles.

When coupled with a Kaleidescape server, the M500 and M300 players will support 1080p video with 24fps (frames per second), and bitstream pass-through of Dolby TrueHD and DTS-HD Master Audio.