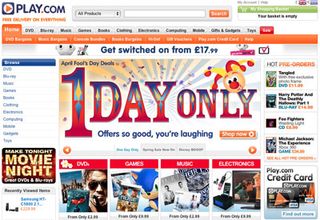 Hopefully it's not an April Fool: Play.com is having a one-day sale today on Blu-rays, DVDs and electronics, with Blu-ray films from £5.99.

For Clint Eastwood fans, how about The Director's Collection (five Blu-ray discs) for £32.99? It's normally £50. That gets you Gran Torino, Flags of our Fathers, Letter from Iwo Jima, Mystic River and Unforgiven.

In the electronics sale you can pick up Sony's new BDP-S380 Blu-ray player for £109.99 plus a free copy of Tron Legacy, or Panasonic DMP-BD45 BD player with free Peerless HDMI cable (or Life on Blu-ray half price) for £79.99.

Check out more of today's deals on the Play.com website.