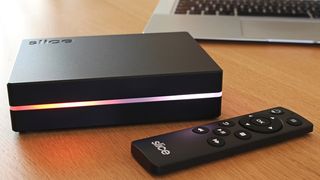 FiveNinjas is now looking to bring the Slice to market and have launched a Kickstarter crowdfunding campaign in an attempt to secure £90,000. The campaign runs until September 25th and is already over two-thirds of the way to achieving the fundraising target.

The idea behind Slice is to make something that's "not only aesthetically pleasing but also easy to use with a sense of fun." The media player, which is smaller than a standard Blu-ray player, runs on the open source media player software XMBC; software that's stable, full-featured and is constantly being developed.

XMBC will allow you to add information and box art to your media files provided you're connected to the Internet. Meanwhile, adding media to the 1TB hard-drive is simply a case of connecting it to a Mac or PC via USB and dragging and dropping media content. A remote control is included with every Slice box purchased for navigating the menus.

With Slice built around a Raspberry Pi Computer Module, it means that it can run a number of different operating systems. If you're not a fan of the software that comes preinstalled on Slice, therefore, you can change it to something to better suit your tastes. An added benefit is that it uses very little power and requires no active cooling.

Slice's creators say the media player is different to others because "most are actually streaming devices that feature a number of 'services' that supply you with subscription based content or pay per view movies. All of these devices require a constant Internet connection to be used as they do not directly store media themselves.

"We feel that there is a need for devices that store and playback your own media files and that can do so without always needing Internet connectivity."

Slice comes with a wealth of additional features too - it can play HD files in "just about any format", support 3D video files and play compressed and uncompressed, high-resolution music files up to 24-bit/192kHz. It can also act as an AirPlay receiver and can be controlled on iOS and Android devices via a free XMBC Remote app.

If you want to secure a Slice for yourself, head over to the KickStarter page where you can pre-order one for £164 including free worldwide shipping.