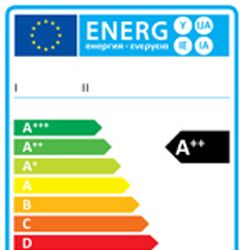 The Government has already pledged to introduce energy labels on all electrical goods sold in the UK from June 20th in response to new EU legislation which comes into force on November 30th.

The EU rules make standard energy labelling compulsory for all TV manufacturers and suppliers from the end of November. Products are rated from A to G, where A is the most energy efficient.

Some manufacturers, such as Sony, have already started using energy saving labels.

Adrian Northover-Smith, head of corporate affairs at Sony UK, says: "We know that energy consumption is an important consideration when buying a TV, not least because televisions can account for almost 10% of the average household electricity bill.

"We welcome the new regulations and have included standard energy rating labels as quickly as possible so our customers are fully informed about the energy performance of all our 2011 Bravia TVs.

It is not alone. All the big electronics manufacturers are keen to stress their new eco credentials. Yesterday Marantz and Denon announced their new 2011 home cinema ranges "aim to stay ahead of future EU regulations on power consumption".

Denon claims that five years power consumption on one of its 2011 AV receivers will cost you just £12.80.